On the occasion of International al-Quds Day

Ayatollah Khamenei: The Zionist regime will be uprooted from ME 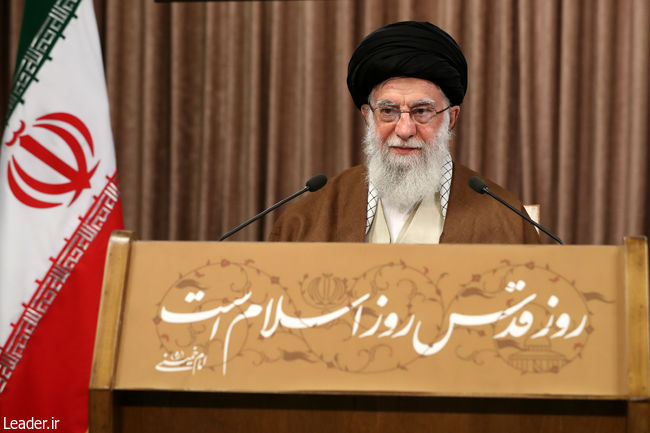 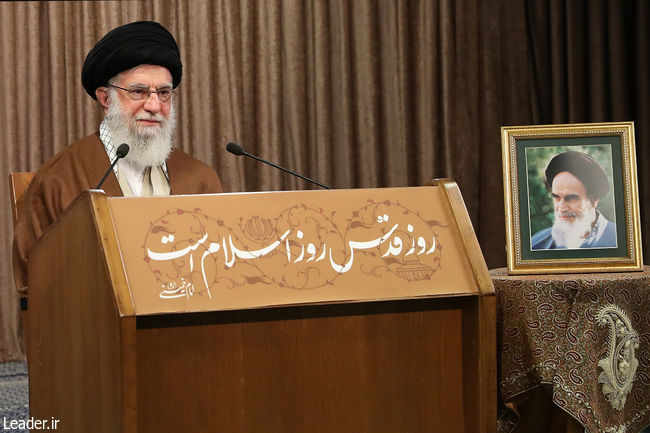 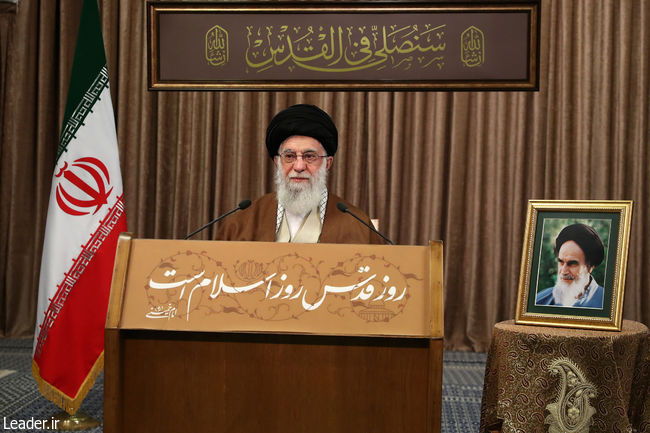 The following is the full text of the speech delivered on May 22, 2020 by Ayatollah Seyyed Ali Khamenei, the Supreme Leader of the Islamic Revolution, on the occasion of Quds Day. In his speech on the occasion of International al-Quds Day, the Supreme Leader of the Islamic Revolution, considered the dawn of the Islamic Revolution in Iran and the subsequent emergence of the Resistance Front to be factors that have impeded the "Zionist virus." He stressed the fact that the Zionist regime, the worst human evil, will be uprooted from the Middle East despite being supported by the United States and its minions, in the not-too-distant future. Without a doubt, the Zionist virus, which is the record holder of human evil, won’t last long, and it will be uprooted.

In the Name of Allah, the Beneficent, the Merciful

2- The aim of this struggle is the liberation of all the Palestinian lands – from the river to the sea – and the return of all Palestinians to their homeland. Reducing this struggle to the formation of a government in a corner of the Palestinian lands – particularly, in the humiliating way that is mentioned in the discourse of shameless Zionists – is neither a sign of righteous struggle nor a sign of realism. The truth is that today millions of Palestinians have achieved a level of thinking, experience and self-esteem such that they can focus their efforts on this great struggle in the way of God and be certain of divine assistance and the ultimate victory. “Surely God will help him who helps His cause; most surely God is Strong, Mighty; [22:40].” Undoubtedly, many Muslims throughout the world will support them and share in their struggle, God willing.

3- Although using any halal and religiously permissible means, including global support, is allowed in this struggle - it is absolutely essential to avoid trusting western governments and international groups that are covertly or overtly dependent on them. They are opposed to any effective entity of an Islamic nature. They have no regard for human rights. They themselves are the cause of the worst harm and crimes against the Islamic nation. Which international entity and which criminal power is currently being held accountable for the assassinations, the mass murders, the warmongering, the bombings and the human-made famines in many Islamic and Arab countries?
Today, the world is counting one by one every victim of the coronavirus across the globe, but nobody has asked who is responsible for the hundreds of thousands of martyrdoms, imprisonments and disappearances in countries where the U.S. and Europe have waged wars. Who is responsible for all the unlawful bloodshed in Afghanistan, Yemen, Libya, Iraq, Syria and other countries? Who is responsible for all these crimes and for the occupation, destruction and oppression in Palestine? Why didn’t anyone count the millions of oppressed children, women and men in the world of Islam? Why doesn’t anyone extend their condolences for the mass murder of Muslims? Why should millions of Palestinians spend 70 years away from their homes and in exile? And why should Holy Quds, the first Qiblah of Muslims, be desecrated? The so-called United Nations is not fulfilling its function and the so-called human rights organizations are dead. The slogan of defending the rights of women and children excludes Yemeni and Palestinian women and children.
This is the current condition of the oppressive western powers and dependent global organizations. The disgrace of certain regional governments that follow them is beyond words.
Therefore, a proud and pious Muslim society must rely on itself and its internal forces. It must raise its powerful hand and remove obstacles by relying on and trusting in God.

4- The important point that must not be ignored by the political and military elites of the Islamic world is that the policy of the U.S. and the Zionists is to transfer conflicts to behind the frontlines of the front of resistance. Staging civil wars in Syria, the military siege and constant killings in Yemen, the assassinations, the destruction, the creation of ISIS in Iraq and other similar things in some other countries in the region are all machinations to divert the attention of the resistance front and to provide opportunities for the Zionist regime. Some Muslim politicians knowingly, and some others unknowingly, have contributed to these machinations of the enemy. The main way to prevent these machinations is for the proud youth throughout the world of Islam to seriously make this demand. Young people in all Islamic countries, particularly in Arab countries, must pay attention to this advice from Imam Khomeini, “Vent all your shouts on the U.S.” and of course, on the Zionist enemy.

5- The policy of normalizing the presence of the Zionist regime in the region is one of the main policies of the United States of America. Certain Arab governments in the region, which act as the minions of the U.S., have been preparing the ground for this normalization by establishing economic ties and the like. These efforts are completely vain and futile. The Zionist regime is a deadly, cancerous growth and a detriment to this region. It will undoubtedly be uprooted and destroyed. Then, the shame will fall on those who put their facilities at the service of this policy of the arrogant powers. To justify such disgraceful behavior, some people argue that the Zionist regime is a reality that the region must come to terms with. They forget that it is necessary to fight and destroy fatal and harmful realities. Today the coronavirus is a reality and yet all wise people agree that it is necessary to fight it. Undoubtedly, the long-lasting virus of Zionism will not last much longer, and it will be uprooted thanks to the determination, faith and pride of the youth.

6-  My main advice is to continue this struggle and to better organize the organizations for Jihad work, their cooperation and to expand the areas of Jihad inside Palestinian territories. Everyone must assist the Palestinian nation in this holy struggle. Everyone must contribute to the Palestinian fighters and stand behind them. We will proudly do everything in our power on this path. One day we came to the conclusion that the Palestinian fighters had piety, pride and courage and their only problem was that they had no weapons in their hands. With divine guidance and assistance, we planned and the result was that the balance of power was transformed in Palestine, and today Gaza can stand against the aggression of the Zionist enemy and defeat it. This change in the equation in the occupied lands will bring the question of Palestine closer to the final steps. The Palestinian Authority has a great responsibility in this regard. One cannot communicate with a savage enemy except through force and from a position of power. Thankfully, the ground has been prepared for the brave and resistant people of Palestine to gain this power. Today, the Palestinian youth are yearning to defend their dignity.
Hamas and Islamic Jihad in Palestine and Hezbollah in Lebanon have been a proof for everyone. The world has not forgotten and will not forget the day when the Zionist army broke through the Lebanese borders and marched to Beirut or the day when a criminal murderer by the name of Ariel Sharon caused a bloodbath in Sabra and Chatila. It has not forgotten and will not forget the day when the same army pounded by Hezbollah had no choice but to retreat from the borders of Lebanon and beg for a truce after sustaining heavy casualties and admitting defeat. This is what full hands and a position of power means. Now let that European governments, which should be eternally ashamed for selling chemical agents to the regime of Saddam Hussein, designate the devoted honorable Hezbollah as illegal. Illegal is a regime like the U.S. that creates ISIS and a regime like that European government whose chemical agents caused the death of thousands in the city of Baneh in Iran and the city of Halabja in Iraq.
7- My final word is that Palestine belongs to the Palestinians; therefore, it should be run as they wish. The referendum - with the participation of all Palestinians of all religions and ethnicities, this is what we have been suggesting for almost two decades -  is the only solution for the challenges which Palestine is facing at the present time and in the future. This proposal shows that the western accusations of anti-Semitism which have been repeated time and time again are completely unfounded. On the basis of this proposal, Jewish, Christian and Muslim Palestinians will determine together the political system of their country by participating in a referendum. That which should definitely go is the Zionist regime since Zionism is a bizarre innovation which has been fabricated in the name of Judaism and is totally alien to that religion.
I would like to close this speech by remembering the martyrs of Quds, including Sheikh Ahmad Yassin, Fathi Shaqaqi, Sayyid Abbas al-Musawi, Martyr Soleimani, the great Muslim commander and the unforgettable face of resistance, and also the great Iraqi Mujahid Martyr Abu Mahdi al-Muhandis. I extend my greetings to the soul of the great Imam Khomeini who opened the path of dignity and Jihad for us. I also ask God the Exalted to bestow His mercy on our late brother, Hussein Sheikh al-Islam who for years worked diligently on this path.

In the end, I would like to remind all dear viewers and listeners that this year's Quds Day is the first Quds day in which our dear Qasem Soleimani is not present. Please recite the chapter “The Opening” (Al-Fatiha) and the chapter “The Unity” (Tawhid) for him one time.
May God’s greetings and mercy be upon you.