The Commander-in-Chief of the Armed Forces referring to the issues of neighbours: 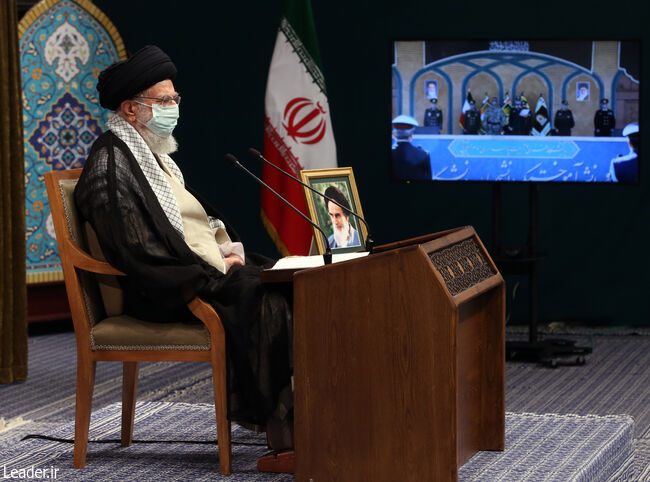 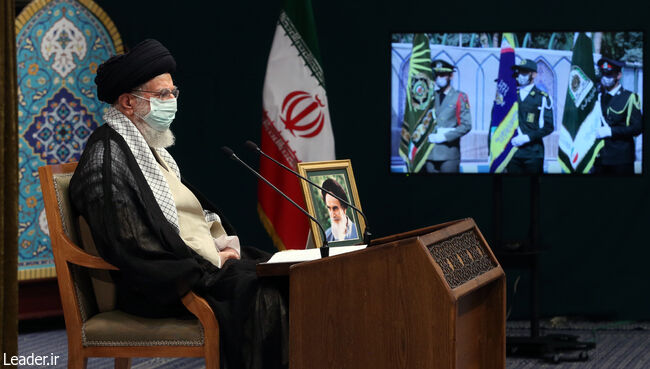 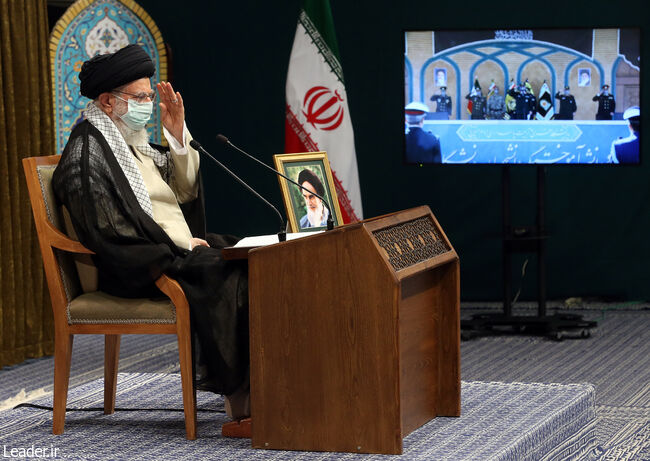 This morning (Sunday), Ayatollah Khamenei, Commander-in-Chief of the Armed Forces, in a video link with the joint graduation ceremony of the Armed Forces at Imam Hussein (a.s) Military University, called the honourable forces "the strong fortress of security of the proud Iranian nation and the powerful and dear homeland" and added: The interference of foreigners in the region is a source of discord and damage, and all issues and incidents must be resolved without foreign interference and by following the example of the countries of the region from the Power and rationality of Iran and the armed forces of the Islamic Republic. The Supreme Leader of the Islamic Revolution expressed hope for the success of the graduates and the promotion of the youth of the Armed Forces in Hosseini School and University, and congratulated the Iranian nation for having faithful, pious, brave and determined and insightful youth and added: the dear commanders, who train the youth of the homeland this way, deserve merit and appreciation.

Referring to the saying of Amir al-Mu'minin about the Armed Forces, the Commander-in-Chief of the Armed Forces added: By the divine grace, the Iranian Armed Forces today are literally the defensive shield of the nation and the country against the offensive threats of external and internal enemies. Ayatollah Khamenei considered being a soldier of the Iranian nation a cause of pride and honour and said: The readiness to defend the Iranian nation and the Islamic, national and revolutionary identity of the country is a great honour for the armed forces. He considered security as the basic infrastructure of all necessary activities for the development of the country and the importance to achieve the security of the country without relying on foreigners, saying: This is normal for the Iranian nation, of course, but different countries, even European countries, suffer from this problem.

He referred to the recent sayings of Europe and America. He said: Some Europeans called the US action a dagger from behind and said in a way Europe should ensure its security independently without relying on NATO and, in fact, on the US.

The Supreme Leader added: "When European countries feel deficient in achieving lasting security due to their reliance on the United States, which does not oppose Europe, the fate of other countries that have placed their armed forces under the control of the United States and other foreigners is clear."

The commander-in-chief called security based on others an illusion and said: "Those who suffer from this illusion will soon face the consequences because the direct or indirect interference of foreigners in the security, war and peace of any country is a catastrophic tragedy."

The Supreme Leader of the Islamic Revolution called the withdrawal of the equipped Army of the United States who lack morale and spirituality from Afghanistan, an example of the results of apparent rather than real power and said: The Americans marched on Afghanistan 20 years ago to overthrow the Taliban and inflicted heavy casualties, crime, and damage during this long occupation, but after all the material and human costs, they handed over the government to the Taliban and left, a fact that is instructive for all countries.

The Commander-in-Chief described the situation of the US Army on its withdrawal from Afghanistan as a reflection of its true nature and said: Those Hollywood images of the US military and countries like it are just a show because their true nature is what was seen in Afghanistan.

The Leader of the Revolution reminded the hatred East Asian people of the American army and said: Wherever Americans intervene, they are hated by nations.

The Commander-in-Chief also considered the military presence of foreigners in the region as a cause of discord, damage and destruction. He emphasized: It is in the region's best interest for all countries to have an independent army based on their nation and synergistic with the armies of the neighbours.

The Supreme Leader of the Revolution added: "Regional armies can provide security in the region and should not allow foreign militaries to intervene or have a military presence to protect their interests."

The Commander-in-Chief added: "The incidents that are taking place in the Northwest of Iran, in some neighbouring countries, should be resolved with the same logic of avoiding the presence of foreigners."

He said: "The armed forces of our dear country always act with authority and rationality, and this rationality should be a model for other countries and a factor in solving existing problems, and everyone should know that if someone digs a well for his brothers, he will fall into the well first."

At the end of his speech, the Commander-in-Chief strongly advised the Armed Forces to continue to be proud of serving the nation and the country and to increase their material and spiritual capabilities.

Prior to the Commander-in-Chief's remarks, Maj. Gen. Mohammad Bagheri, Chief of General Staff of the Armed Forces of the Islamic Republic of Iran, reported on the combat, defence, and security capabilities of the Armed Forces, as well as its social services to the people and referred to the US defeat in Afghanistan, and said: "This humiliating defeat and the evacuation of a large part of their equipment and bases in the region, and the defeat of the Zionist regime in the 12-day battle called the Sword of Jerusalem, are signs of acceleration in the decline of the United States."

The swearing-in ceremony, the awarding of flags by old and new students, and the performance of a joint song by stationed students at the stage were other programs of the Armed Forces' joint graduation ceremony.