On the blessed birth anniversary of the Prophet Muhammad (PBUH) 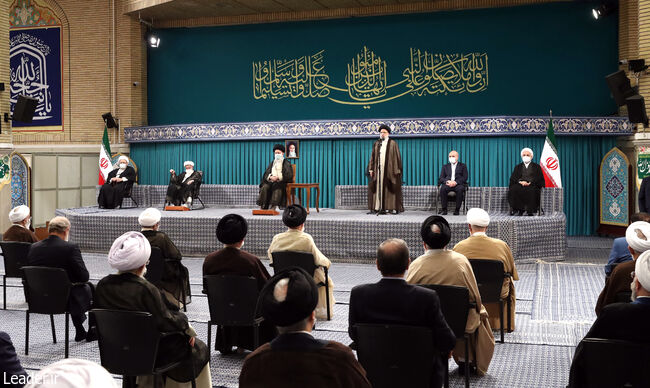 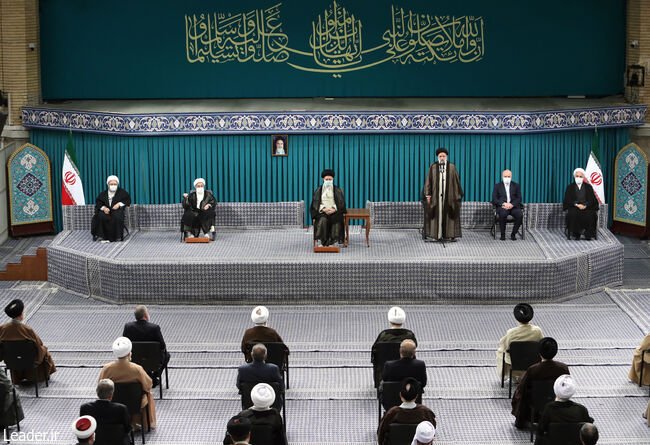 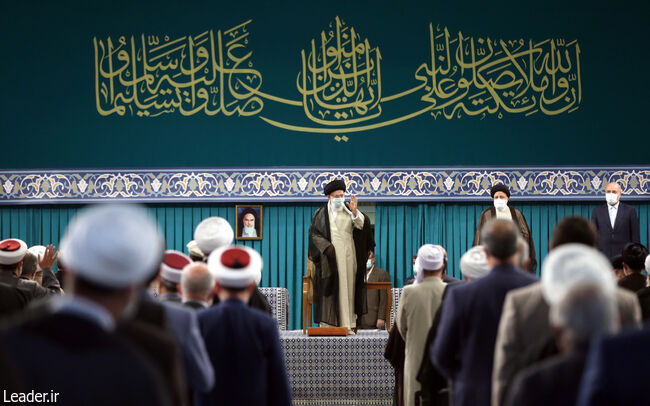 On the blessed birth anniversary of the Prophet Muhammad al-Mustafa (PBUH) and Imam Ja'far al-Sadiq (a), the Supreme Leader of the Islamic Revolution, in a meeting with a group of officials and guests attending the International Islamic Unity Conference, considered "explaining and promoting the comprehensiveness of Islam in all aspects of human life" and "strengthening the unity of Muslims" as two critical duties for the Islamic Ummah and noted: Islamic unity is a principle matter, and Qur'anic duty and achieving the lofty goal of creating a novel Islamic civilization is impossible without the unity of Shia and Sunni Islam.

Congratulating these two birth anniversaries to the Iranian nation and all members of the Islamic Ummah and free-thinkers of the world, Ayatollah Khamenei called the birth of the seal of the Prophets a very significant event and the beginning of a new era of divine favours in human life and added: By announcing the complete plan of human prosperity to the Prophet, God commissioned him to implement and demand this plan from his followers, so the believers in every period of time must know and perform their duties.

He considered "fulfilling the right of comprehensiveness of Islam" and "unity of Muslims" as two of the most important duties of the Islamic Ummah in today's time and for explaining the first duty, he followed: Political and material powers have long insisted on presenting Islam not as a comprehensive religion with a plan for all aspects of human life, but only as an individual action and heartfelt belief, and by theorizing it by the authors and intellectuals, insinuate that Islam is neither an intellectual authority nor a practical guide on important issues such as "building civilizations and management of society", "economy and division of power and wealth", "war and peace", "domestic and foreign policy", "establishing justice and dealing with oppression and evildoers".

Emphasizing that Islamic texts explicitly reject such inferences from Islam, the Supreme Leader of the Revolution considered the fulfilment of the right of Islam as dependent on explaining and promoting this crucial fact and added: Islam's field of activity and intervention includes all the scopes and aspects of human life from the depths of heart and worship matters to political, economic, social, security, and international issues, and whoever denies this meaning, has certainly not paid attention to the numerous guidances and verses of the Holy Qur'an.

Ayatollah Khamenei considered the emphasis of Islam on social issues and the critical task of building civilizations as a sign of its commitment to the governance and said: It is not possible to demand social order in Islam without considering the issue of governance and appointing an imam and in the Qur'an, prophets have been mentioned as imams, meaning, leaders and commanders of societies.

He considered the explanation of the comprehensive of Islam in all aspects the duty of scholars, intellectuals, researchers, and masters of the Islamic world. He then added: Of course, the Islamic Republic of Iran has a heavier task in this regard, and the country's officials, especially cultural officials, must perform their duty.

In another part of his speech, the Supreme Leader of the Islamic Revolution emphasized the vital issue of "Muslims' unity" and praised several Hard-working figures in the field of Islamic unity, such as the late Mr Taskhiri, the late Mr Vaezzadeh, the martyr Sheikh Muhammad Ramadan Al-Bouti, the martyr Seyyed Mohammad Baqir Hakim, the late Sheikh Ahmed El-Zein, and the late Sheikh Saeed Sha'ban.

He considered the Muslims' unity a definite duty and a Qur'anic order, adding: "Islamic unity is a principle matter, not a tactical matter for special circumstances, and this synergy strengthens Muslims to engage  in communications with non-Muslim countries more confidently."

Ayatollah Khamenei attributed the reason for the repeated emphasis on the issue of unity to be the immense distance between different Islamic schools and the serious efforts of the enemies to increase the spaces and stated: "Today, the words Shia and Sunni have entered the American political literature though they are opposed to the principle of Islam."

The Supreme Leader of the Revolution, referring to the efforts of the US and its puppets to create sedition everywhere in the Islamic world, noted: The recent unfortunate and heartbreaking explosions in the mosques of Afghanistan against Muslims and worshipers are among these incidents that ISIS carried out, and the Americans had explicitly stated that they created ISIS.

He did not consider the annual meetings and gatherings on the issue of unity sufficient and added: in this field, discussion, explanation, encouragement, planning, and division of tasks must permanently be performed, for example, in the case of Afghanistan, one of the ways to prevent disasters is that the current esteemed officials of the country to be present in centres and mosques, or to encourage Sunni brothers to attend joint gatherings.

Ayatollah Khamenei deemed the securance of the crucial goal of creating a new Islamic civilization to be impossible without the unity of Shia and Sunni and said: The primary indicator for the unity of Muslims is the issue of Palestine and the more is done to revive the rights of Palestinians, the stronger the Islamic unity.

He stated that the actions of some governments in the region to normalize relations with the usurping Zionist regime is a big crime and mistake and added: "These governments must abandon this behaviour and the anti-Islamic unity path and make up for their huge mistake."

In the last part of his speech addressed to the Iranian people, the Supreme Leader of the Revolution considered following the great Prophet of Islam conditional on serving him and putting him as your exemplar, especially in the three subjects of "patience", "justice", and "morality" and stated: Patience means perseverance and resistance against sin and weakness in performing duties, as well as resistance against the enemy and various adversities.

He emphasized that we need stability more than anything today and addressed the officials: Continue the path with solidity and resistance, enduring pressures and problems, and do not stop.

Ayatollah Khamenei stated that justice is an important intermediate goal of the mission of the prophets and the Holy Quran even considers justice necessary regarding the enemies.

The Leader of the Revolution emphasized fair behaviour in all matters and not limiting it to the division of property and wealth, and pointed to cyberspace as an example and noted: Sometimes in cyberspace, slandering, defamation and speaking without knowledge are treated against justice, and both those who deal with this space and those who are responsible for it should be careful.

He added: "We should learn to behave fairly, and even in situations in which we do not agree with someone's opinion, we shouldn't discredit our disagreement with slander, lie, and insult."

"Following the prophetic morality" was the last point that the Supreme Leader of the Revolution pointed out and said: Islamic morality means humility, forgiveness, being easy-going in personal matters, beneficence, and avoiding lies, slander, and suspicion towards other believers, should be considered as an eternal instruction.

Ayatollah Khamenei emphasized that we claim that we are Muslims and the Islamic Republic must be accompanied by action, and we must follow the great Prophet in practice.

Before the speech of the Leader of the Islamic Revolution, the President called the existence of the Holy Prophet (PBUH) the greatest blessing and the peak of transformation for humanity and said: Our revolution's Imam also arose in obedience to the Holy Prophet (PBUH) and by relying on God and people, and today, the document of the second step of the revolution is a guide of evolution in all parts of the country and a response to the needs of the people.

In another part of his speech, the President mentioned the issues of COVID-19 and the supplying of essential goods as the two main concerns at the beginning of the government and said: "Today, with extensive vaccination, a big step has been taken to protect people's health and by providing essential goods, people's concerns in this regard have been addressed."

Hujjat al-Islam wal-muslimin Raeisi expressed the country's foreign policy as a wide-ranging interaction with the world, especially the neighbouring countries, and by stressing that the country's economy will not be tied to negotiations and the like, added: We are committed to what we have promised, but the United States and the Europeans are in a decision-making crisis.