A video meeting with a group of people of Qom 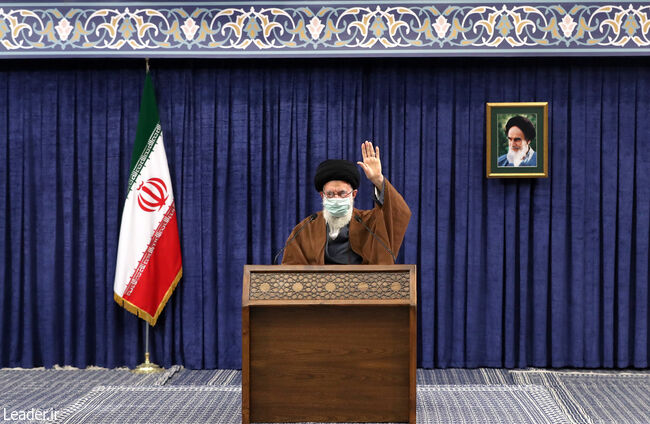 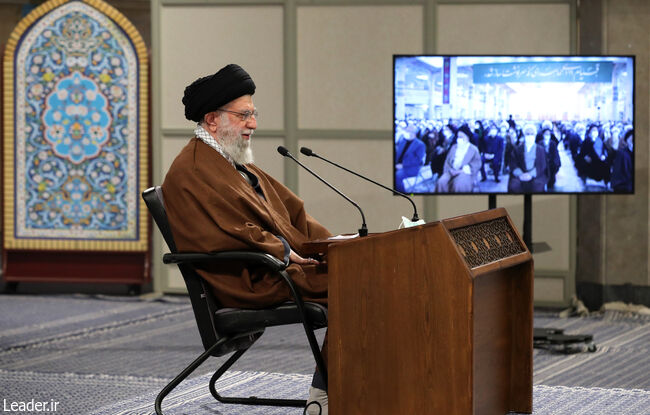 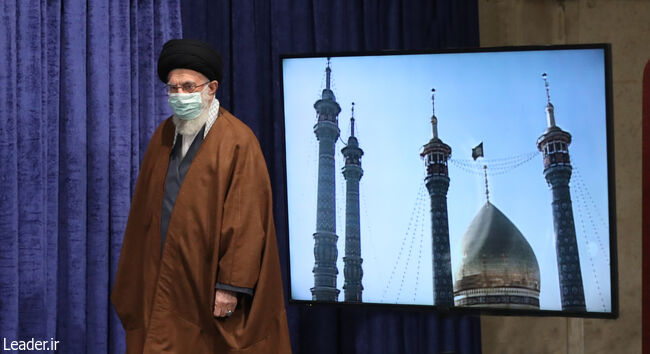 The Supreme Leader of the Islamic Revolution this morning (Sunday) in a video meeting with a group of different groups of the people in Qom, called the historic uprising of January 9th, 1978  in Qom a manifestation of "the depth of religious belief" and "religious zeal along with rationality" and referred to America's deep hatred of the system (Islamic Republic) based on the beliefs of the Iranian nation and said: "We must move towards a bright future with an understanding of the current task, hope, unity and strength. In this direction, the officials should also expand their tangible efforts to solve problems by strengthening and completing the aspect of the people."

The Supreme Leader of the Revolution called the incident of January 9th, 1978 as the source of creating a series of movements in different cities and finally the victory of the revolution and added: Such events, which have strong themes and great messages for future generations, should not be fading from our memories.

He added: The incident of January 9th and its socio-political sequences showed the depth of the religious beliefs of the people because if the Imam as the religious authority and the religious expert, were not at its centre, no other person nor movements could make the nation rise from city to city.

Ayatollah Khamenei, referring to the centrality of brave religious scholars, who know politics, in most of the historical and social events of the last 150 years in Iran, including the tobacco case, the constitutional movement, the Goharshad incident, the July 21st uprising and the June 5th uprising, said: Influential elements may make some people move But to wave the great ocean of the nation against colonialism and imperialism and then what followed, is only the work of a religious scholar and authority, and hence the secret of the deep enmity of the imperialists with religion, religious scholars, political scholars, political jurisprudence and political Islam can be understood from this.

Referring to those who consider the slogan "Death to America" ​​as the cause of the perpetual imperialistic hostility to the Islamic Republic, he added: "America is a big enemy of the Islamic system because it considers this system to arise from the religion and the manifestation of the nation's religious beliefs."

He considered Imam Khomeini (RA) as the full manifestation of religious zeal along with rationality and wisdom and added: Imam's worthy disciple, Ayatollah Misbah, was also literally at the peak of both religious zeal and the rationality of philosopher.

The Supreme Leader of the Revolution called the decision of the Taghut (evil) regime to publish an insulting article about the Imam in one of the newspapers, a decision based on calculations and plans and said: Realizing the growing influence of the Imam in the people, the Taghut regime wanted to degrade his motivating and energizing position and destroy the centrality of the movement. And if the pungent punch of the people of Qom had not hit the chest of Taghut on January 9th, 1978, it would have continued its movement in various forms.

The Supreme Leader of the Revolution, referring to the support of Washington for Taghut and the words of the then US President Carter in Tehran on December 31st, 1977, added: Cater, based on the miscalculations of the Americans, which is continued even today, named Iran Pahlavi "the stability island", but the uprising of the people of Qom and the subsequent series of uprisings disrupted the calculation plan of the regime and the United States in a way that Carter was forced to send a general, called Huyser,  to Iran in 1978 to suppress the Islamic Movement of the Iranian people by manslaughter, coup d’état, or any other method, which failed by God's grace.

Ayatollah Khamenei considered the martyrdom of Commander Soleimani as another example of the continuation of the Americans' miscalculations; he also added: "The terrorists wanted to destroy Hajj Qasem as a symbol of the great movement he represented, but a great movement and expression of public devotion and love from the Iranian people and people from other countries on the second anniversary of Sardar's martyrdom, which was a great move by God's power, showed that the American computing system is rightly and relatively flawed.

Referring to the 43rd anniversary of the glorious victory of the revolution and the establishment of religious democracy, the Supreme Leader said that a living nation must learn from the past, recognize its current duties, and determine a vision and take firm steps towards that vision. He then added: "This loyalty and foresight will lead to the ultimate success and victory, that is, the good life of the Iranian nation and the provision of religion, the world and the spiritual and physical well-being of the nation."

Expressing satisfaction with the spread of thought and action of the faithful and Hezbollahian youth throughout the country, he said: "Some comments and reports do not tell the truth of the nation, and the true heart and feelings of the people should be understood in events such as the funeral of Martyr Soleimani."

Ayatollah Khamenei continued to make some critical remarks to the people and officials to maintain the vitality and progress of the Islamic Revolution.

He called "religious zeal" the factor in saving the country at crucial times and turning threats into opportunities, adding: "Keep religious zeal because it was the religious zeal of the people which made us win in The Holy Defense, that is, the international war that the United States, the Soviet Union, NATO, And the majority back then launched to bring the revolution to its knees."

The Supreme Leader of the Revolution considered the historical funeral of Martyr Soleimani as another example of the eruption of the opportunity-making zeal of the people and said: In that ceremony, the Iranian nation once again revealed its religious and revolutionary unity and identity, and if that holy body had gone to Syria, Lebanon and Pakistan, Like Iran and Iraq, would have been widely welcomed by Muslim nations."

Ayatollah Khamenei called "desensitization of the principles and foundations of the revolution through extensive propaganda in cyberspace and foreign media and highlighting the words of low-minded and pretentious people" as other plans of the enemies and said: the principles of the revolution such as "Formation of government and society based on religious geometry ", "Independence" and "Fighting Corruption and Injustice" should not be weakened.

In this regard, he added: "Not surrendering to the imperialistic and oppressive enemy" is also one of the principles of the revolution, and if at some point there are negotiations, talks and interactions with the enemy, it does not mean surrendering to them, as we have not surrendered so far, and we never will.

The Supreme Leader of the Revolution considered the desensitization of the principles of the revolution as part of a broad and diverse cold war against the nation and invited intellectuals and writers and owners of social and virtual activities to confront this plan, adding: imagining that the principles of the revolution are not beneficial for the people and the future is in contrast with the reality, and it is absolutely unfair.

Emphasizing that adherence to the principles of the revolution is one of the essential tools for the country's progress, he noted: "During these 43 years, wherever we have progressed and moved, it is the result of the spirit and struggle of believers and revolutionaries. And wherever the work is unfinished, there is opportunism, corruption, aristocracy and non-revolutionary views.

In another reminder, Ayatollah Khamenei called on everyone to "preserve national unity and cohesion" and stressed: Of course, for some who oppose the revolution, the revolution has no choice but to stand firm, but "differences of opinion and taste" should not lead to taking sides against each other, weakening of hope and distortion of public cohesion.

Referring to the expertise of some enemies of the revolution in the policy of "divide and rule" and their efforts to create religious differences and involve Shiites and Sunnis, he added: "These issues should not be allowed to happen and become extreme in the country, as for centuries, the Shiites and the Sunnis have lived together in the country without any conflicts and differences, so there should be no excuse for the differences, which fortunately has not been the case."

The Leader of the Islamic Revolution added: "Now someone says something wrong and someone feels responsible, but these issues should not be continued, and everyone should maintain public cohesion."

In his following recommendation, Ayatollah Khamenei stressed the need to strengthen hope for the future and said: "The hopeful youth works and tries and researches better. Of course, strengthening hope is not just about talking, and the officials should fill the hearts of the youth with hope by working and trying, which they are, in fact, doing right now, thank God.

Referring to the success of the Islamic Republic in various fields, he added: "Despite economic and livelihood problems, especially for the poor and problems such as banking and tax problems, the Islamic Republic has important achievements in various categories, that should be stated for the people and those who only talk about the issues and are unaware of these achievements.

Ayatollah Khamenei, praising the people and government's subtle motivation, called the strengthening and completion of this movement necessary and added: "We must keep our promises on time, and if for any reason the fulfilment of our promises is not possible, explain it openly and honestly to the people."

He stated that it is necessary to have a mechanism to use the views and methods suggested by experts, specialists and the public, examine how to use public participation in government actions, and advise government officials to use public capabilities to oversee issues such as corruption and greed.

At the end of his speech, the Supreme Leader of the Revolution emphasized: The officials should work for the people with all their might and pure intentions, and expand the current subtle work and effort, so that God may bless these efforts as much as possible.