The Supreme Leader of the Islamic Revolution in a live and televised speech on New Year: 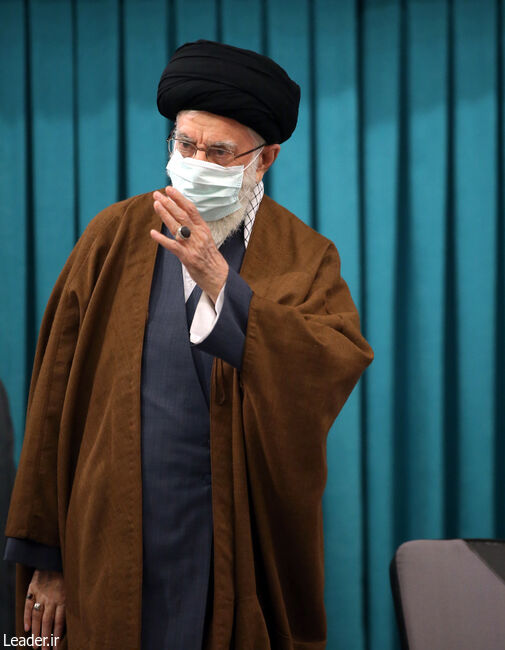 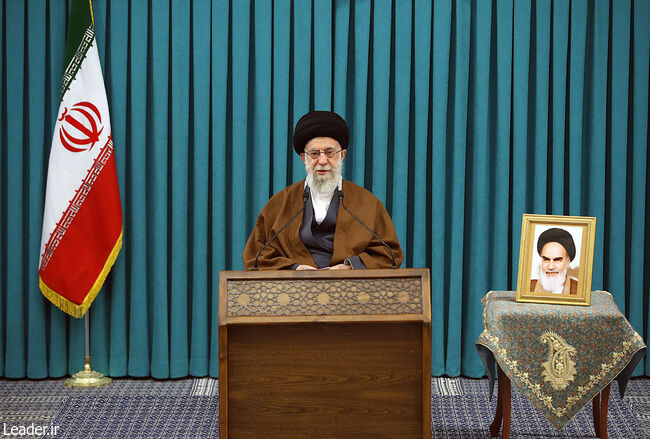 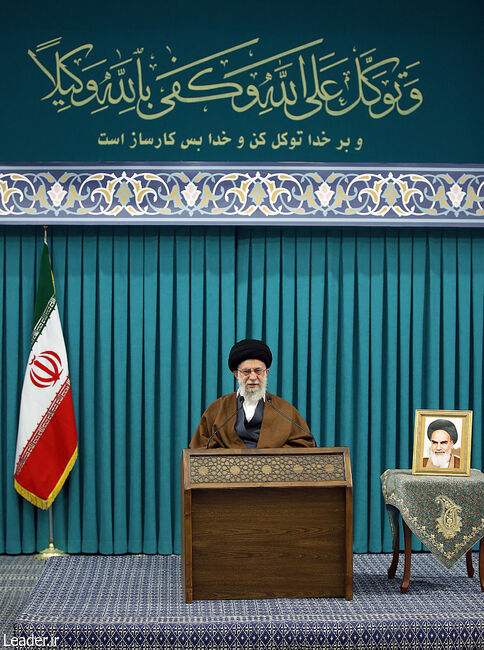 Congratulating Nowruz and the beginning of the new century in a live and televised speech on the first day of 1401, the Supreme Leader of the Islamic Revolution, called the only way to achieve adequate progress and solve the problem of poverty is to move towards a knowledge-based economy, explaining the motto of the new year. In another part of his speech, he referred to the global issues taking place in Afghanistan, Ukraine and Yemen. He emphasised: All these events show the Iranian nation's legitimacy and the right choice in the fight against arrogance. Ayatollah Khamenei considered the fusion of the national holiday of Nowruz with prayer and spirituality as one of the features of the Iranian Nowruz and said: Spring is the manifestation of hope and the messenger of freshness and growth, which has been doubled this year due to coincidence with mid-Sha'ban, which is the birthday of the great hope of history and humanity.
Emphasising hope is the source of all movements and progress, the Leader of the Islamic Revolution said: Those who give speeches to people or write articles or send messages should do whatever they can to create hope in people because hope is an essential factor in progression. By noting that God Almighty has provided the hope grounds for the Iranian nation, Ayatollah Khamenei said: Let the enemies be angry with the hopefulness of the Iranian nation.
After this introduction, he started his main discussion and referred to the choice of economic titles in the last decade and also the motto of 1401. Then he added: The reason why an economic title and slogan was chosen for this year is the pivotal role of the financial issue as well as the economic challenges in the last decade, and getting rid of these challenges requires proper planning, action and movement. Ayatollah Khamenei added, emphasising the central point of executive officials and those involved in running the country to be economic today. There are new people-centred approaches that, if appropriately continued, are encouraging. The Leader of the Islamic Revolution emphasised that the only way to achieve economic growth is to move towards a knowledge-based economy, and added: Knowledge-based economy refers to the scientific and technological view on production in all areas, which will result in reduced production costs, increased productivity, improved product quality, the competitiveness of products on a global scale and reduced cost of domestic products. Emphasising the fact that achieving modest progress in the economy and solving the problem of poverty can only be through strengthening Knowledge-based production, the Supreme Leader of the Revolution said: The number of knowledge-based companies must increase, and this is possible. Referring to the activities of about 6700 knowledge-based companies in the country, he said: In the new year, to meet the needs of the country, the number of knowledge-based companies should be doubled, but this should not prevent those companies that are not really knowledge-based to be launched and established.

Ayatollah Khamenei, referring to the backwardness of some production sectors such as agriculture, added: The issue of agriculture and animal husbandry is fundamental, and the country must achieve complete self-sufficiency and security in basic food products such as wheat, barley, corn, animal feed and oilseeds. He considered the achievement of this goal possible due to the vastness of land and abundance of fertile plains in the country. He said: Unfortunately, the agricultural sector is one of the most dependent sectors of the country on imports, and this situation must be adjusted. The Supreme Leader of the Revolution, referring to the remarks of one of the former ministers of agriculture about barrier creation of import stakeholders and preventing the reduction of dependence on basic goods, said: It is difficult to fight this dependence due to the great interests of some people and possibly their influence and sabotage in some agencies and ministries, but the officials must make an effort and do this hard work.

He stressed the need for officials to support knowledge-based companies by purchasing their products or allocating facilities and added: The number of knowledge-based companies should be an indicator of progress in each administration and an indicator for evaluating the officials of that ministry and department. Ayatollah Khamenei called the increase of knowledge-based companies quite possible considering the country's facilities, especially the most important facility and capital of the country, that is "educated human resources" and added: According to reports, a high percentage of educated individuals are working in fields unrelated to their education, while the efforts of professional and young people, who are the greatest wealth of the country, can be used to enrich the country. He also said "job creation" depends on the increase of knowledge-based companies and said: Of course, we should not make past mistakes in this regard. The Supreme Leader of the Revolution said in expressing one of these mistakes: In previous governments, various schemes were proposed to increase production and banking facilities, but almost all of them failed, so the blind fund allocation will not do any good, and every job should be studied and performed correctly. Emphasising shaping the chain activities of knowledge-based companies, he also raised a consideration. He said: as a result of certain recent decisions, some small and medium-sized companies may be affected, which the government and banks should not allow.

In another part of his speech, Ayatollah Khamenei recalled his emphasis last year on the first day of the year to avoid "tying the country's economy to the US sanctions and saying that this is the situation as long as sanctions are imposed, added: Fortunately, new policies in the country have shown that progress can be made despite the US sanctions being lifted, foreign trade boosted, regional agreements entered into, and make achievements in oil and other issues. The Leader of the Islamic Revolution said: "Of course, I am not saying in any way that you should not seek lift of sanctions and those who are working in this field should follow their work, but the basis is to run the country in such a way that sanctions cannot have a major impact on the economy. So this year, I repeat the same advice " Do not tie the country's economy to sanctions". In a supplementary recommendation, he pointed to rising oil prices and foreign exchange earnings, and asked what is to be done with these earnings and said: These incomes can be treated in two ways, or they can either be spent on increasing imports with the idea that the welfare and comfort of the people will increase. Although this work has a good appearance, but its interior is terrible, and in fact, it is a waste of the basic capital of the country. Ayatollah Khamenei added: "Another way, which is the right and fundamental way, is to use oil revenues to build the country's infrastructure and strengthen the foundations and root the economy, which must be done."
In another part of his speech, the Supreme Leader of the Islamic Revolution referred to the various global issues currently taking place, all of which require planning, movement, decision and correct action and said: When we look at the current problems of the world, the legitimacy and truthfulness of the Iranian nation in the face of the arrogant front becomes clearer. Ayatollah Khamenei emphasised that the choice of the Iranian nation against the hegemony front was "resistance, non-surrender and non-dependence, maintaining independence and internal strengthening of the system and the country", noting: "These decisions were national and correct." Referring to the case of the oppressed Muslim country of Afghanistan and the oppression and crimes of the Americans and the way they left after 20 years, he said: The case of Ukraine is another example in which the president, who the West appointed, also uses a sharp tone to address them. The Supreme Leader of the Islamic Revolution also referred to the cases of Yemen and the daily bombing of the resilient people of this country, and on the other hand, the Saudi action in beheading 80 young people and adolescents and noted: All these cases show the oppression reigning the world and the bloodthirsty wolves that have the world in their hands. Ayatollah Khamenei considered the unveiling of Western racism as one of the angles of Ukraine's cases and said: Separating blacks from whites and disembarking them from trains, or outspoken Western regrets in their media of war in Europe rather than in the Middle East, are examples of overt Western racism. He cited another example of western hypocrisy in confronting oppression in countries. He added: If oppression occurs in their obedient countries, they will not react at all, and despite all the pressure, they also claim human rights and through these false claims, they demand ransom from independent countries. Ayatollah Khamenei emphasised: Today is one of the most disgraceful and brutal periods in the contemporary history of oppression and arrogance. The people of the world are directly watching these oppressions and hypocrisies."
Reiterating how the Iranian nation improved its work method over the years and has proceeded within the framework of seriousness and logic, he added: Today, more than ever, the country needs work, effort, empathy and synergy, that is, empathy and synergy between the nation, empathy and synergy between the officials, and empathy and synergy between the nation and the officials.
The Leader of the Islamic Revolution considered some of the existing conflicts to be mainly absurd and arising from the personal desires and impiety and emphasised: These issues must be put aside, and there must be no disruption in the path of public mobilisation of the Iranian nation in the ways of science, practice, resistance and social service.