The Leader In a televised speech on the International Quds Day:

Only the resistance force can solve Palestine's problem 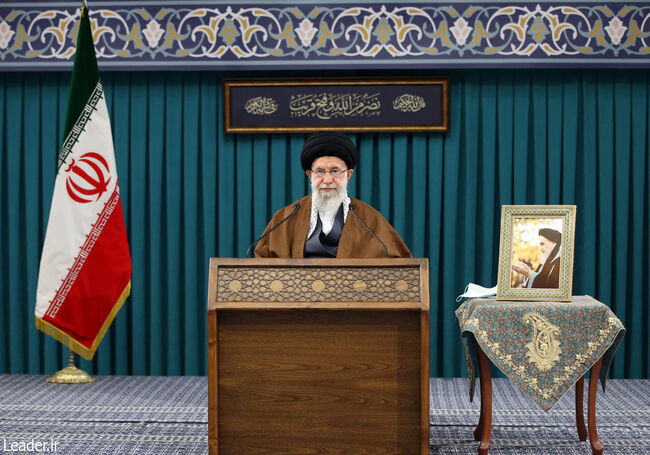 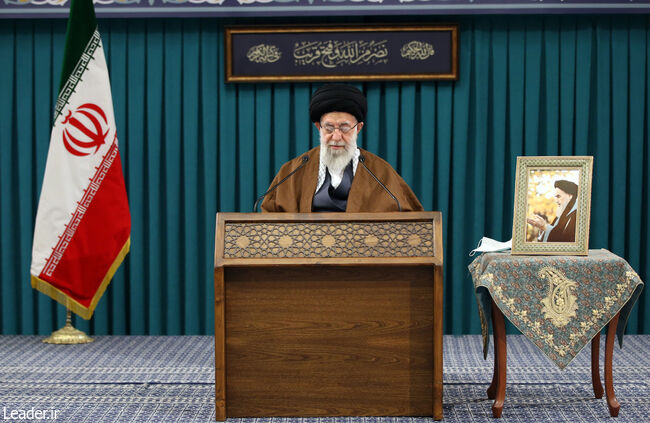 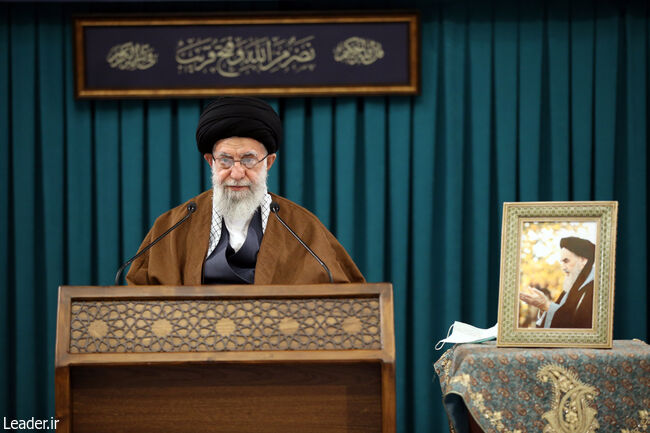 The Supreme Leader of the Islamic Revolution, in a televised speech on the occasion of the International Day of al-Quds, listed auspicious signs of a different future in favour of the Palestinian people, including the expansion of the field of resistance to the whole of Palestine and on the other hand, the weakening of the occupying regime and its main supporter, the United States. He saw the events of recent years in Palestine as the cancellation of all plans for reconciliation with the Zionist regime; he recalled the irreplaceable blessings of the resistance in West Asia and emphasized: The problems of the Islamic world and, above all, Palestine's issue could be solved merely with the resistance force.

At the beginning of his speech, Ayatollah Khamenei sent greetings to the Grand Imam [Imam Khomeini], the founder of the Blessed Quds Day, and greeted the great nation of Iran, who today created a great epic with an entire incentive presence in the field all over the country and added: Your fabulous and blessed presence in the field of real political and popular defence of al-Quds will strengthen and increase the endurance of those who defend al-Quds and al-Aqsa Mosque with their body and soul, and God willing, the great Palestinian struggle will be close to its final and blessed results.

The Supreme Leader of the Revolution went on to say that; today, he intends to speak in the Arabic Language to the Islamic world, especially the Arab world, emphasizing the fact that as long as the usurper and criminal Zionist regime dominates Quds, every day of the year should be considered Quds Day and said: Holy Quds is the heart of Palestine, and the whole occupied country, from the Mediterranean Sea to the Jordan river is the continuation Quds.

Admiring the unique resilience and courage of the Palestinian people, he described the self-sacrificing operations of the Palestinian youth, the creator of a defensive shield for Palestine and heralded a different future. He expressed the signs of the emergence of new equations today and tomorrow in Palestine. He noted: Today, the "invincible will" has replaced the Zionist "invincible military" in Palestine and the whole of West Asia. The criminal military has been forced to turn its offensive position into a defensive.

The successive defeats of the most important supporter of the Zionist regime, the United States, in the war in Afghanistan, in the policy of maximum pressure on Islamic Iran, against the Asian powers, in world economic control and its internal management, as well as the phenomenon of a deep rift in American governance, were referred to as signs of a different future.

To the Paddling of the Zionist regime in a multitude of political and military problems, he added: The former executioner and criminal who was at the head of the regime joined the garbage dump following the epic of Saif al-Quds and his successors today are waiting for the sharp razor of another epic. Ayatollah Khamenei pointed out concrete examples of the spread of resistance throughout Palestine, such as the movement of the Jenin camp that has driven the Zionists crazy. 70% of Palestinians demand a military attack on the occupying regime, the Jihadist movements of the Palestinian people in the northern and southern parts of the 1948 territories, heavy marches in Jordan and East Jerusalem, the Palestinian youth's fierce defence of al-Aqsa Mosque and military exercises in Gaza, and emphasized: The whole of Palestine has become a scene of resistance, and the Palestinian people have become united in continuation of jihad. These critical phenomena mean the full readiness of the Palestinians to confront the occupying regime, leaving the Mujahideen organizations free to take action whenever they see fit.

He called the important message of these events. In recent years, what has happened in Palestine is the annulment of all compromise plans with the Zionist enemy and said: No timetable for Palestine can be implemented in the absence or against the opinion of its owners, the Palestinians. This means all previous agreements, such as Oslo, the Arab two-state plan, the deal of the century, or recent humiliating normalizations, have been annulled.

The Supreme Leader of the Revolution referred to the continuation of all kinds of crimes of the Zionist regime despite its suffocation and added: The human rights liars in Europe and the United States, who created a turmoil in the case of Ukraine, have remained silent in the face of all these crimes in Palestine and are not defending the oppressed, but also helping the bloodthirsty wolf.

He stressed the great lesson of this deceitful behaviour of the racist Western powers to refrain from reliance on them. He emphasized: Only with the force of resistance, which is derived from the teaching of the Holy Quran and the rules of the beloved Islam, can the problems of the Islamic world and, above all, the issue of Palestine be solved.

Ayatollah Khamenei called the formation of resistance in Western Asia the most blessed phenomenon in the region and noted: It was the existence of the resistance that cleansed the occupied parts of Lebanon from the Zionists, pulled Iraq out of the throat of the United States and saved it from ISIS, helped the Syrian defenders against US plans, and fought international terrorism. It is aiding the resilient people of Yemen in the war that has been imposed on them; it will bring the Zionist usurpers to their knees by hand to hand combat through divine success and makes the issue of al-Quds and Palestine more prominent in the world public opinion through effort and struggle.

Recalling the glad tidings verses of the Holy Quran indicating God's help to the believers and those patient, he emphasized to the Palestinian people and its devoted youth: The Islamic Republic of Iran, as it has repeatedly said and insisted on in practice, is a supporter of the Palestinian Resistance Front and condemns the treacherous move to normalize relations with the occupying regime and normalization the policy.

The Supreme Leader of the Revolution, noting that some Arab governments have told the United States to hurry in resolving the Palestinian issue, added: If they mean the United States should remove any obstacle to the establishment of the usurper regime before leaving the region; first this is a betrayal and has created disgrace for the Arab world, and secondly they have shown naivety because the blind cannot lead the blind.

At the end of his speech, he greeted the souls of the Palestinian martyrs and paid tribute to their families. And he sent his blessings to the Palestinian prisoners and detainees who are resisting with a strong will and added: I shake hands with the resilient Palestinian groups that have taken on an essential part of this great responsibility, and I call on the Islamic world, especially the youth, to participate in this field of honour and dignity.