The Leader addressed the members of the Islamic Consultative Assembly 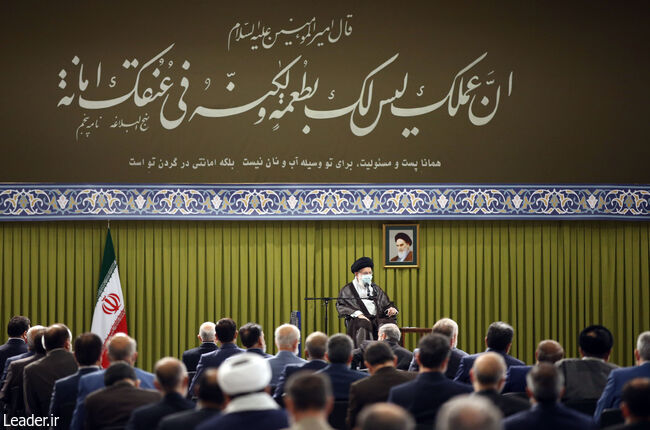 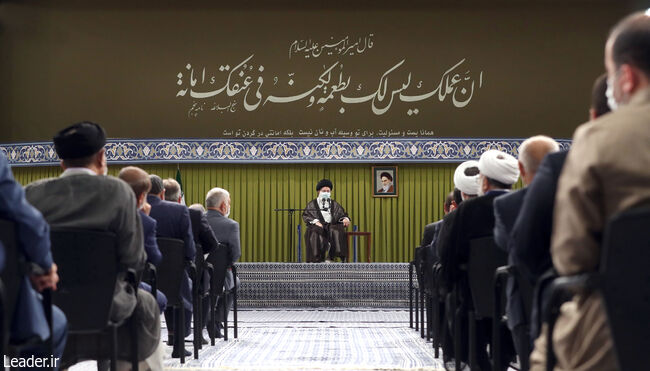 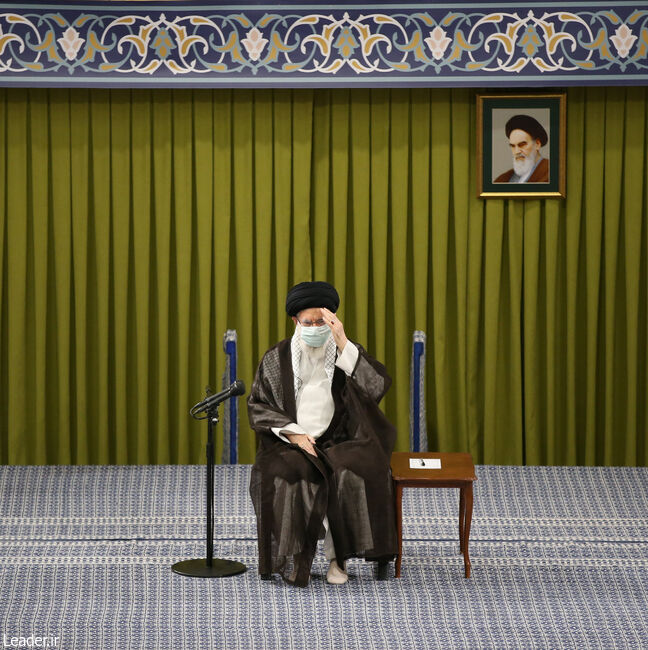 This morning (Wednesday), in a meeting with the Speaker and members of the Islamic Consultative Assembly, the Supreme Leader of the Islamic Revolution referred to the factors of this change. He called the conquest of Khorramshahr a symbol of changing a bitter result equation to a sweet result equation and realising national salvation. He said: The rule of overcoming difficult, complex and heartbreaking conditions and achieving victory and success is jihadi action, steadfast determination, initiative, self-sacrifice, long-term vision, and above all, sincerity and trust in God Almighty.

He considered the Islamic Consultative Assembly as one of the central management pillars of the country. He referred to the difficulties and complexities of managing the country in the current dangerous international situation. He called on all forces and institutions to understand the importance of their position and have sincere cooperation with each other. He emphasized that the correct understanding of abilities and vulnerabilities is one of the most vital issues because the enemy is watching our mistakes more than having hopes in his own abilities.

Explaining the reason for this change in the equation, Ayatollah Khamenei added: The factors of national salvation achieved with the conquest of Khorramshahr are: jihadi action, self-sacrifice, determination, initiative, a broad perspective of goals and ideals, and above all, sincerity and trust in God.

He considered these factors and the general rule as the salvation prescription in all matters and all times. He emphasized: The basis of this salvation rule is the inviolable promise of God in the Qur'an, which is a victory to individuals and a society that adheres to these factors, and God will not waste the actions and efforts of the individuals of such a society.

The Leader of the Islamic Revolution said: "Sacrifice means not being caught in the clutches of petty desires, and many problems of individuals and societies begin with giving in to petty desires."

Ayatollah Khamenei then mentioned the issue of the parliament and emphasized the Islamic Consultative Assembly is one of the central management pillars and sides in the country and has an important position and said that MPs from different cities and even from sparsely populated cities should have such a view of the position of the parliament and realize the difficulty and complexity of managing the country.

Referring to Iran's vastness, population, geography, history and diverse climate, he emphasized: Managing a country with the characteristics of dear Iran is an important task and, given the current special conditions of the world, it is naturally rugged and complex.

The Leader of the Islamic Revolution pointed out: Of course, management has become difficult for all countries in today's world.

Explaining the reasons for the particular circumstances prevailing in the world, Ayatollah Khamenei said: Hostile rivalries and threats of nuclear powers against each other, increasing military movements and threats, and war near Europe as one of the world's most war-torn regions, the little precedent spread of disease, and global food threats are all factors that characterize the current world situation. He pointed out: In addition to the conditions that prevail in all countries, Iran is constantly challenged by world powers in various dimensions due to the presentation of a new model, which is religious democracy, that has disrupted the regular plan of the dominating system.

The Leader of the Islamic Revolution emphasized the Islamic Republic has shielded itself against all hostilities and is progressing and succeeding, and added that MPs, the government, the judiciary, and other bodies should all know in what tremendous and important management they are involved in and increase their care in accordance to this position.

Ayatollah Khamenei pointed out: We must recognize both the capabilities and the vulnerabilities and be careful not to make mistakes because the enemy hopes for our errors more than he desires for his abilities. Referring to his previous definition of the 11th Islamic Consultative Assembly as the Revolutionary Assembly, the Supreme Leader added: "Some people did not like this definition, but it was a true definition because the representatives' elected for this Assembly had revolutionary slogans and orientations."

He praised the good deeds in the last two years of the 11th parliament and went on to describe the characteristics of a "revolutionary parliament member" and said: The first indicator is "simplicity, and not being captivated by luxuries and extravaganza", and the lives of the members should not be different from before the term of parliament membership.

"Being responsible" is the second indicator of a revolutionary assembly member the Supreme Leader emphasized: stand firm by a law you ratify but do not pass a law knowing that the Guardian Council will reject it or the government is unable to implement it, only to get rid of its responsibility on your shoulders.

He called "people-oriented" another indicator of a revolutionary member. He added: "Being people-oriented means in addition to sitting and standing with the people, you listen to what they have to say but explain clearly the reason for wherever it is not possible to fulfil the people's demands, and this is an example of explanatory Jihad.

Ayatollah Khamenei considered "prioritizing the country's problems and the solutions to them" as another indicator of the revolutionary parliament member and said. Another indicator is" severe avoidance of discrimination and corruption ", both in the face of others' corruption and when observing self in abstaining from corruption.

He considered "sincere cooperation with other departments as well as their bodies" and avoidance of distraining and conflicts among the requirements of the Revolutionary Assembly. He noted: The revolutionary parliament member is affable towards the general public, but he is not unjustifiably impressionable by the public, so when acting and passing a law in the parliament, if the objections were reasonable, he accepts them. However, the atmospheres and controversies created against the parliament and the law should not prevent you from doing your job.

The Supreme Leader of the Revolution considered "full adherence to the Constitution and its duties" as another characteristic of the revolutionary parliament member. In concluding this part of his speech, he said: Of course, one of the things that are not a sign of being revolutionary is the interim parliament talks with protest and anger.

Ayatollah Khamenei made some recommendations on legislative issues

Emphasizing "law-making through comprehensive and long-term view and avoiding legislation for every small matter", he called attention to the general policies communicated in law. He added: It is the duty of the parliament to legislate on the basis of these policies and not get into conflict with them. Of course, some general policies, such as general election policies or general legislative policies, require legislation, and even though several years have passed since their promulgation, the relevant laws have not yet been passed.

The Supreme Leader of the Revolution called the proposal of the parliament members' proposal, especially in cases where there is a gap and need in the country. Still, the government has not submitted a bill about them, among the rights and duties of the parliament and said: I heard in this parliament, the number of proposals is more than the previous assemblies, which is not very appropriate, and the expert work and their implementation will be hampered, and with the non-implementation of the law, the responsibilities will go to waste. He added: "With every new assembly, the plans that had a lot of time and effort during the previous parliament will get put aside. This issue needs to be amended.

The other recommendation of Ayatollah Khamenei was to "reform the structure of the budget", and he said: The wrong budget composition has not yet been corrected, this is mainly addressed to the government, but in parliament, too, the budget deficit, which is the root cause of economic problems, should not be added by increasing spending without determining real and achievable revenues.

Emphasizing "strengthening the expertise of the parliament, both in the research centre and in the specialized commissions", he referred to the formulation of the seventh development plan and said. These five-year plans should not be limited to generalities. Still, the government and the parliament should clear the way for the country's stakeholders by writing the central issue of the plan and documents.

In his following recommendation, he emphasized "paying attention to the media dimensions of the bills and acts enacted by the parliament and their explanation to people". He said: Not explaining it correctly to the people creates an opportunity for propaganda and chaos against the enactment, and you will regret passing it.

Praising the agility and timely reports of the supreme audit Court in recent years, Ayatollah Khamenei added: Recently, the audit court has started reviewing the budgets of some state-owned companies, and if you extend it to all state-owned companies, it will be one of the scores of this parliament. Referring to his previous advice to the members to avoid interfering in the appointments, the Supreme Leader of the Revolution noted: The Speaker said some members were offended by this recommendation, while this recommendation is in your own interest because if an official is appointed in an area at the suggestion or pressure of a parliament member, but his performance is not desirable, it is not clear who should be held accountable. He added: "One of the critical issues in the constitution is the issue of separation of powers, and everyone should perform their duties; of course, we have always advised the statesmen to use the advice and opinions of the parliament members.

Emphasizing the importance of preserving the dignity of individuals and refraining from expressing unproven matters from the important tribune of the parliament, Ayatollah Khamenei said: The more responsibility there is, the greater should be the worship and supplication of man to God Almighty and the intercession of the Imams of guidance to God.

In the end, he sent blessings to the holy souls of the great Imam and the martyrs of the Islamic Revolution and the Holy Defense and commemorated martyr Sayyad Khodai, who was martyred in a terrorist operation three days ago.

At the beginning of the meeting, Dr Qalibaf, Speaker of the Islamic Consultative Assembly, explained the actions of the 11th Assembly in the last two years, and called "attention to the neutralization of sanctions" the primary strategy of the Assembly and said: Within the framework of this strategy, the parliament seeks the realization of a "package of changes in economic laws.

The Speaker stated the parliament emphasizes measures to reduce the cross-cutting problems of the people while resolving the roots of the issues and considered the approval of the redistribution of preferential foreign exchange subsidies in the form of commodities as essential goods as one of the actions of the members in this regard.

Explain legal measures to facilitate the issue of business licenses, enactment of legislation on vacant home taxes, support for knowledge-based companies, transparency, car imports, support for families and population rejuvenation, prioritize disadvantaged and marginalized areas in budgets and enactments, follow up Improving the soldiers' problems were the other focus of Mr Qalibaf's report during the meeting.