The Leader on the thirty-third anniversary of the departure of Imam Khomeini:

Taking back the stolen good is not theft 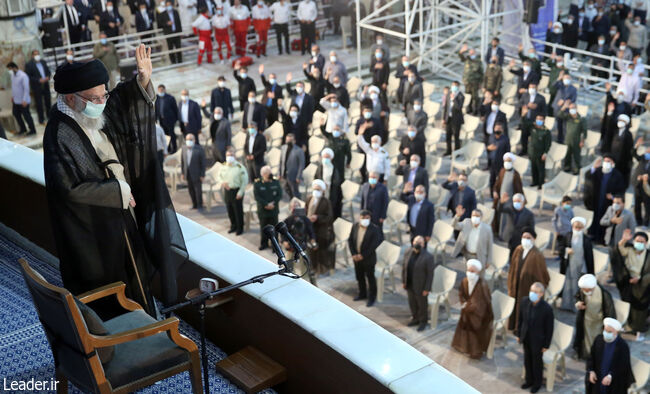 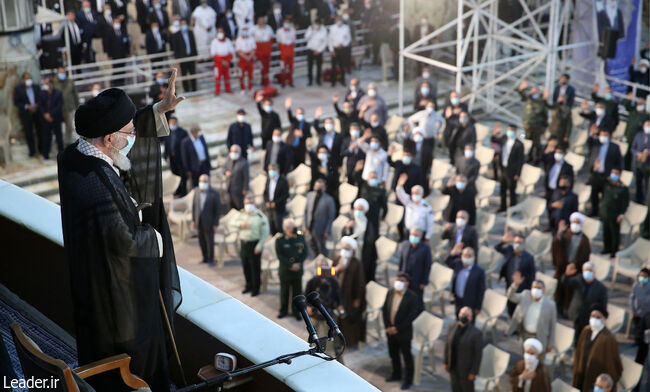 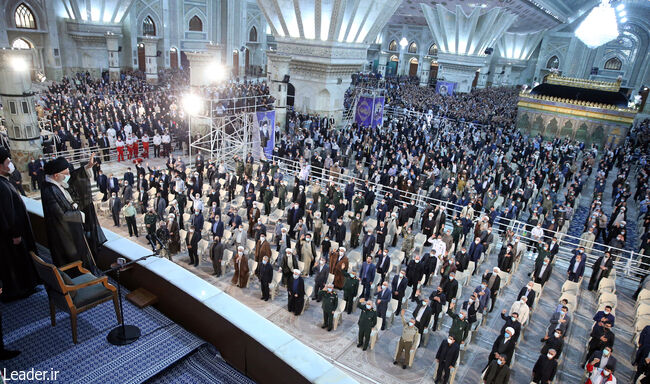 Ayatollah Khamenei attended the shrine of the Grand Leader of the Revolution this morning (Saturday) on the occasion of the 33rd anniversary of his departure from life, calling Imam Khomeini the soul of the Islamic Republic, a genuinely impressive figure and Imam of "yesterday, today and tomorrow of the Iranian and emphasized: the current young and intelligent generation needs reliable, comprehensive, accelerating and transformative software, i.e. the lessons, speech and morals of the Imam, to govern the future of the country and lead the nation to glorious peaks.

He also gave important advice to people and revolutionary, cultural, political and economic activists to prevent the de-identification of the revolution and distortion of the Imam, exposing the enemy's lies and psychological warfare, and advised on avoiding the infiltration retrogression and Western lifestyles, and appreciating revolutionary officials.

In this ceremony, which was held in person after two years, the Supreme Leader of the Revolution referred to the still unknown dimensions of Imam Khomeini's personality and said: Despite many words and writings about that sage guide, there is a lot left unsaid about his greatness and character power and leadership, and the young generation who do not know the Imam well, in order to fulfil national and revolutionary responsibility and take the second step of revolution and for optimal governance, must take and learn progressive and determinant lessons of the Imam's school in order to move towards the bright future of the country confidently.

He considered the presence of the nation as the definitive factor of the victory of the revolution but said: It was the strong hand, steely personality, confident heart and Zulfiqar-like language of Imam Khomeini that pushed the great ocean of the nation to the field and brought it to turmoil while keeping hope in the field without despair. It was the great Imam Khomeini who taught the movement direction to them.

Describing the manifestations of Imam Khomeini's full-minded and meaningful leadership and his influential power in determining and educating the battlefield, Ayatollah Khamenei pointed to the severe events of the movement and the Islamic Republic and added: in the statements of the last year of his life and his will, the Imam determined the battlefield even for his later period.

The Supreme Leader of the Islamic Revolution emphasized that the Imam (May Allah be pleased with him) was distinguished in terms of personal characteristics in the true sense of the word. He expressed some of his attributes and said: "Purity and piety", "Spirituality and mystical states", "Courage", "Wisdom and rationality", "analyst", "Hope for the future", "Honesty", "timeliness and order", "trust, and confidence in "God's Promise" and "being a fighter" were among the prominent characteristics of the late Imam.

The Leader of the Islamic Revolution said: The movement of the Imam during the struggle had several salient points, which were courageousness, openness to people, trust in people, appreciation of the struggle of the people, and instilling hope in the hearts.

The Leader of the Islamic Revolution considered one of the salient features of the Imam's new model to be coordination of the seemingly contradictory duals and said: In the new model and political system presented by the Imam, "it is both spirituality and the will of the people", "it is both the implementation of divine commands and observance of public needs and interests", " insistence on both the economic justice and the observance of the weak and insistence on production of "Wealth", " denial of both oppression and being oppressed", "it is strengthening of science and economics and the strengthening of the country's defence", " it is national cohesion and unity, acceptance of diversity of opinions and different political tendencies", "emphasis on piety and "It is the emphasis on the purity of the officials and their expertise and professionalism.

Ayatollah Khamenei then asked an important question and said: To what extent has this school and model the Imam designed and founded been realized during the time of the Imam and after him?

He added: "My answer, knowing the country's facts, is that" the Islamic Republic has achieved great successes in all areas such as democracy, scientific progress, diplomacy, economics and public services, which would be unfair to deny. We had both progression and weaknesses and failures.

The Supreme Leader of the Islamic Revolution, in stating the cause of weaknesses and failures, added: To find the cause, the Imam guided us and said, "Your record depends on effort and hard work," that is, wherever the nation and officials enter the field with a strong will, there is progress. And wherever there is weakness in the will, it causes backwardness. Ayatollah Khamenei pointed out that the role of the vast enemy front from the beginning of the revolution's victory until today should not be ignored.

The Supreme Leader of the Revolution considered another factor of enmity with the Islamic Republic to be the severe distance between the Imam and the Westerners and said: supporting Palestine and giving the embassy of the usurping regime to the Palestinian people, criticizing the hypocrisy and crimes of European and American countries are examples of distancing between the Islamic system and Western civilization and thought.

The Supreme Leader of the Revolution also called the great privilege of the Imam to acquaint the people with the concept of resistance and inject the spirit of resistance into the nation and said: "Thanks to the Imam, today, the Iranian nation is completely resilient and strong, and resistance has become one of the prominent words in world political literature.

Ayatollah Khamenei further exposed the two conspiracies and disturbing dreams of the enemies for the Iranian nation and said: The first part of this plan in the hopes of the enemies for public protests to strike the country through psychological work and activities in cyberspace and to create mercenaries and all kinds of tricks to pit people against the Islamic system with money.

He considered the second part of this conspiracy to be the indoctrinating the miscalculations about the falling of the Islamic Republic and added: "The ill-wishers said at the beginning of the revolution would fall in six months, and after their miscalculation came out, they promised another six months, while today, more than eighty of those six months promises have passed since the revolution, and that slender sapling has become a robust tree, and their calculations today are as utterly wrong as in the past.

The Supreme Leader of the Revolution emphasized: In the Islamic Republic, the factor of the people is a significant factor, and the enemies will not be able to put the nation against the Islamic system. Analyzing the reason for the successive miscalculations of Iran's enemies, he pointed to the role of several traitorous Iranian advisers in shaping these calculations and said: "These traitorous advisers are betraying not only their country but even the Americans because with these miscalculations, they will cause them to failure.

"The turning away of the Iranian people from religion, the clergy and the Islamic system" was another example of erroneous consultations and calculations that Ayatollah Khamenei pointed out and added: In addition to what the Americans have said under the influence of ignorant and traitorous advisers, few naive people inside the country have made these false statements in the media.

He Emphasized today, the people's inclination toward religion and revolution is certainly more than the beginning of the revolution and pointed to prominent examples of the glorious presence of the people in celebrating the resistance and the clergy and said: The million participants funeral of the torn body of Martyr Soleimani and the commemoration of that revolutionary, militant and worrier man, and the funeral and expression of people's feelings on the death of high-ranking scholars and jurists such as Ayatollah Safi, Golpayegani and Ayatollah Behjat are not comparable to the commemoration of any other political and artistic figure in the country. People believe in the clergy, religion, jihad and resistance and show people's belief in the clergy, religion, jihad and resistance.

The Leader of the Islamic Revolution considered the energetic presence of the youth in the centres of I'tikaaf and great spiritual gatherings, as well as the glorious marches on the 22nd of Bahman and Quds Day, as other signs of the nation's loyalty to the path of the great Imam and added: Another example of the religious devotion of the people is the expression of enthusiasm and dedication of the people from old and young and children throughout the country to his holiness the Vali al-Asr (a) in the form of a hymn that has been played these days.

In the final part of his speech, Ayatollah Khamenei addressed seven important recommendations to activists in the revolutionary, social, political and economic fields.

In the first recommendation to the intelligent and wise youth, the Supreme Leader of the Revolution emphasized: Do not let the enemy and the counter-revolution de-identify your revolution and distort its reality.

He advised, "do not let the memory of the Imam, who is the spirit of the revolution, diminish in society and do not let them distort him". He devoted his third recommendation to "preventing the influence of retrogression" and said: that retrogression means a return to Western politics and lifestyle, and the country should not be allowed to move towards retrogression by being influenced by the Western lifestyle that existed during the corrupt Pahlavi era.

In the fourth recommendation, he emphasized "exposing the lies and deception and psychological warfare of the enemy" and pointed to a new example of this psychological warfare: The Greek government recently stole our country's oil at the behest of the Americans, but when the self-sacrificing heroes of the Islamic Republic seized the enemy oil ship, they accused Iran of stealing in their widespread propaganda, while they were the ones who stole our oil and so taking back the stolen good is not theft.

Ayatollah Khamenei advised the "use the of the capital of the people's faith as a capital to produce righteous deeds". He dedicated his sixth recommendation to "preventing the indoctrination of impasse in the country" and said: The job of some people in cyberspace, either through negligence or because of money, is to indoctrinate the country to reach a dead end. Of course, during the Imam, some people wrote in the newspapers that the country had reached a dead end. The Imam's response to that was it is you who have reached a dead end, not the Islamic Republic.

Referring to some of the valuable activities of the officials in recent days, the Supreme Leader of the Revolution said: The direct presence of a minister in Abadan for several days and nights and the meeting of the president and his deputy with the victims of the accident and comforting them are valuable and appreciated examples; Of course, the perpetrators of sabotage in the Abadan case and in other issues must be punished.

At the beginning of the ceremony, Hujjat al-Islam wal-muslimin Sayyid Hassan Khomeini, in a speech, called the great Imam a preacher of independence and the dignity of the Iranian nation and said: Imam was pure truth and pure spirit and a symbol and manifestation of brilliant Islamic and popular ideals.