The Leader in a meeting with the chief justice, officials and staff of the Judicial system

The secret to the victory of the Iranian Nation is resistance 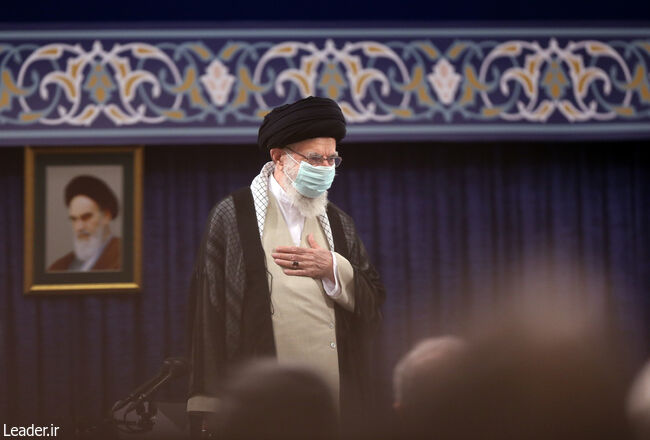 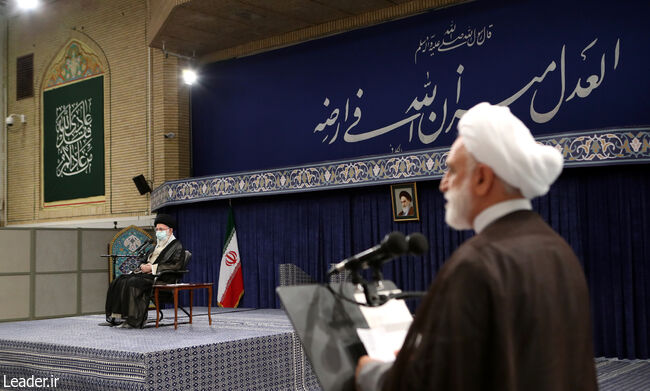 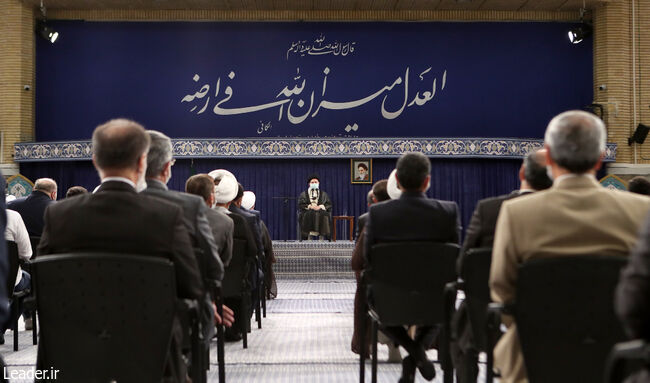 This morning (Tuesday), during a meeting with the chief justice and a group of officials and employees of the judiciary, the Supreme Leader of the Islamic Revolution explained the "immutable divine traditions in societies" and said: The reason for the astonishing triumphant and victory of the Iranian nation and the Islamic Republic in the face of the great and bitter events of 1981 was their resistance, effort and fearlessness of the enemies, and this divine tradition can be repeated in all times.

He also called the judiciary a critical and influential pillar in the country's affairs. He made eight recommendations such as the serious implementation of the reform document at all levels, serious fight against corruption, prevention of abuse of public rights, care of people's mental security, regulation of the judiciary relations with officers and Finalizing the cases opened in public opinion were addressed to the officials of this system.

In this meeting, the Supreme Leader of the Islamic Revolution honoured the memory of Martyr Ayatollah Beheshti and other martyrs of the 7th of Tir. He called Martyr Beheshti a truly prominent figure and referred to the complex and exceptional circumstances of the months leading up to the 7th of Tir 1360 and after. He said: Examining the conditions of that time is instructive and raises our knowledge for today.

Ayatollah Khamenei reviewed the situation in 1360, the months before the seventh of Tir (the 28th of June 1981), and pointed to the problematic status of the imposed war and the advance of Saddam's forces near several large cities in the west and south and added: In addition to the very unfavourable conditions of the war, the Munafiqin (hypocrites, known as MKO ) had practically started a civil war in Tehan, and politically, a few days before the 7th of Tir, the parliament had voted for the political incompetence of the president and the country did not have a president. In such circumstances, a pillar [of the Islamic revolution] like Martyr Beheshti was taken from the revolution and the nation.

He also referred to the martyrdom of the President and the Prime Minister two months after the 7th of Tir incident and, after that, the martyrdom of several senior army chiefs in a plane crash. He said: The youth and the new generation are unaware of these events, and they should study these issues and think about them carefully. What government and country do you know does not collapse to such bitter and dreadful events?

The Supreme Leader of the Islamic Revolution pointed out: In the face of all these events, the compassionate officials, with Imam Khomeini (r.a) as strong as the Damavand mountain at the top, stood firm alongside the people and revolutionary youth and were able to change the situation of the country one hundred and eighty degrees. The consecutive failures turned into successive victories, the Munafiqin (MKO) were cleansed from the streets, the army and the military corps became more robust, and the country returned to normal.

Ayatollah Khamenei referred to the exhilaration of the enemy in some stages due to some weaknesses and internal shortcomings in the country and added: in 1360, and after that, in the last four decades, the enemy has exhilarated and raised hope because of certain issues thinking the revolution and the system are finished, but this hope has turned into despair. Their problem is they cannot realize the secret to this despair.

He emphasized: The enemy cannot understand that in this world, other calculations are the divine traditions apart from political calculations.

The Supreme Leader of the Revolution pointed to examples of divine traditions and laws in the Qur'an as a result of helping the religion of God or the result of ingratitude to the blessings of God and added: The Holy Qur'an is full of themes related to the divine traditions, and they conclude that if societies stand against the enemies and perform their duties by relying on God, the result is victory and progress. However, if they suffer from differences, slackness and weakness, the result will be a failure.

The Supreme Leader of the Revolution called the judiciary an essential and influential pillar in the whole country and said: According to the verses of the Holy Quran, the Islamic government must set up prayers, which means spreading the spirit of worship in the Islamic Republic, paying Zakat that means distributing justice in the Islamic society, and enjoining the good and forbidding the evil, i.e. enjoining values such as justice, fairness, brotherhood and forbidding oppression, corruption and discrimination. This principle (enjoining good and forbidding evil) is emphasized in the constitution and is also one of the duties of the judiciary.

He added: "If these duties are not performed using various facilities such as the facilities of the judiciary and justice, it would be an example of wasting divine blessings, and we will be hit from this area."

Ayatollah Khamenei called the chief justice of Iran a believer, revolutionary, hardworking, affable, far from formalities, familiar with various aspects of the judiciary, and attentive to critics, and gave eight recommendations to officials and staff.

In the first recommendation, he considered the reform document prepared in the previous management period as one of the most progressive reform documents. He added that this document should be acted upon, and characterization and staff training should be based on it.

The Supreme Leader of the Revolution called the implementation of the reform Document a reason for preventing passivity in the face of opposition and added: The head of the system is bound by the document, but at other levels, including all judges, staff and managers must vigorously pursue this, although according to some reports, this has not happened as it should have.

He confirmed the words of the chief justice, stating that "the fight against corruption in the judiciary is a priority", noting: The majority of judges are honourable, chaste, noble, faithful and hardworking, but the few corrupt ones who harm the work and reputation of others must be dealt with. Of course, the main task in the fight against corruption is to confront the corrupt structures and break them down.

The Supreme Leader of the Revolution emphasized strengthening judicial knowledge and preventing the issuance of weak or distorted sentences. In the following recommendation, he advised encouragement of honourable judges and hardworking staff.

"Do not suspend any of the authorities and legal missions of the judiciary" was the other advice of Ayatollah Khamenei to judicial officials. He said in this regard: For example, the attorney-general has duties in the field of public law that, is to prevent the abuse of public rights with complete observation and, of course, away from emotions and rhetoric.

He cited crime prevention as another example of the essential tasks of the judiciary. He said that crimes such as land grabbing and illegal ownership of mountains should be prevented by acting per the legal obligation to determine land ownership in cities and villages.

In the sixth recommendation, the Supreme Leader of the Revolution emphasized "regulating the relations between the judiciary and judicial officers" and said: The officers' conduct should be monitored so that there is no exaggeration or extremism when dealing with the accused. The judiciary system should not be influenced by the officer but should deal with issues independently. Of course, the expert opinions of the officers should not be ignored.

He added: "One of the complaints of the officers from the judiciary is the abandonment of some cases due to legal shortcomings, while this gap should be filled by completing the laws."

In his following recommendation, Ayatollah Khamenei referred to the responsibility of the judiciary for the psychological security of the people and said: Psychological security is a public right, and the judiciary must prevent people from being disturbed and distorted by false and frightening rumours and statements by specific or unknown individuals in the media and cyberspace.

In his eighth and final recommendation, the Supreme Leader of the Revolution referred to the opening of essential and various cases to public opinions, such as factory issues or illegal seizures and emphasized: The scars of cases that opened to public opinion should not be left undealt with. Continue each file to the end and finalize the cases.

At the end of his speech, he described judicial work as one of the most challenging tasks and said: Of course, if you do this work for God and with divine guidance, there will be a great reward.

At the beginning of the meeting, Hojjat al-Islam Wal-Muslimin Mohseni Ejei, the chief justice of Iran, presented a report on the actions of this system in the recent period. He emphasized there has been more communication with different groups of people, and the interaction with other parts of the Islamic system has been strengthened. There have been efforts to implement the Judicial reform documents. The Judiciary system has leapt in using new technologies and intelligence for judicial services. There is more support for production and removal of barriers that have freed up some judicial services in deprived areas. The Judicial system has seriously fought against corruption, especially within the judiciary, prioritizing high-profile and essential cases in public opinion and intensifying monitoring. He stressed the need to implement the necessary laws and regulations, as well as continuous and ongoing follow-ups to improve employees' living conditions and strengthen the judiciary's budget base.