The Leader in a meeting with the participants of the Ahl al-Bayt World Assembly: 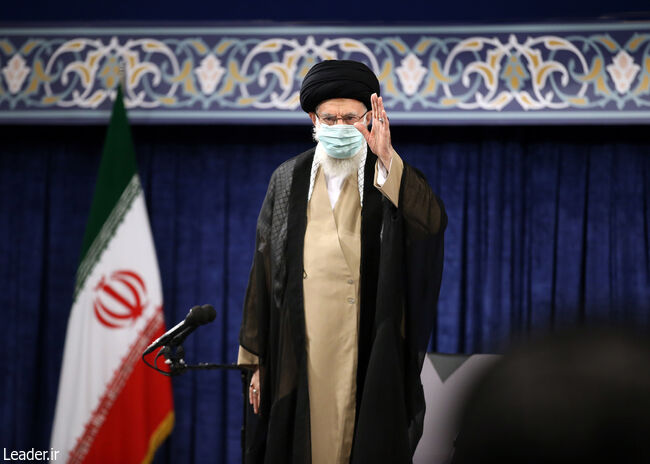 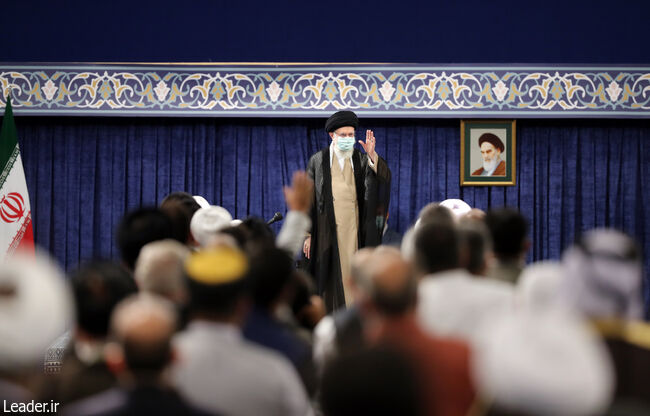 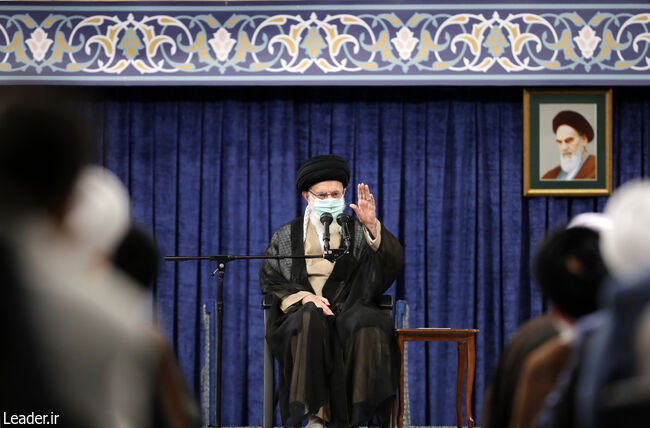 The Supreme Leader of the Islamic Revolution this morning (Saturday), in a meeting with the members of the Ahl al-Bayt World Assembly and guests participating in the seventh congress of this assembly, called the greatness and popularity of Ahl al-Bayt unparalleled in the world of Islam and emphasized: The Islamic Republic, as the raised flag of the Ahl al-Bayt against the domineering system, believes that there is no real religious, ethnic, sectarian, and racial dividing line in the Islamic world, and the only main and true dividing line is the demarcation between the Islamic world and the global front of blasphemy and arrogance.

Ayatollah Khamenei strongly advised the Ahl al-Bayt World Assembly to take advantage of the greatness and popularity of Ahl al-Bayt in the Islamic world and added: The assembly should be the base and place of inspiration for all Muslims and souls who are interested in the teachings of Ahl al-Bayt and should act in such a way that it becomes the adornment of Ahl al-Bayt.

The leader of the revolution called the teachings of Ahl al-Bayt a comprehensive collection of all the different needs of human beings and human societies and said: Today's Islamic communities are in serious need of all aspects of Ahl al-Bayt's instructions, and the World Assembly must perform this heavy duty with accurate and correct planning and the use of reasonable methods and effective tools.

Referring to the raised flag of the Islamic Republic of Iran, the leader of the revolution added: The followers of Ahl al-Bayt and the Shias of the world are proud that the Islamic system is standing its ground and is not backing down against the seven-headed dragon that is the domineering system and, by the self-confession of themselves, has defeated many of their plans.

The leader of the revolution considered the steadfastness of the Islamic Republic to be an inspiration from the Ahl al-Bayt and added: Those shining stars have taught us with their theoretical knowledge and practical ways how to walk the path of dear Islam by following and contemplating the Qur'an.

Ayatollah Khamenei called the flag of the Islamic Republic the flag of justice and spirituality and said: It is obvious and natural that the world of arrogance, in which all its beliefs and actions rely on material things, money and force, would rise up in conflict and hostility against this flag.

He called America to be at the forefront of arrogance and added: Inspired by the Quran, the venerable Imam taught everyone to put aside unreal dividing lines between Islamic societies and accept only one dividing line, which is the demarcation of the Islamic world with blasphemy and arrogance.

Ayatollah Khamenei noted: It was based on this deep belief that support for Palestine was placed on the agenda of the Islamic Revolution from the very first days, and the Imam stood by the Palestinian issue with all his strength. And the Islamic Republic is still following the same political geometry drawn by the honourable Imam and will remain faithful to it in the future.

He believes that the unique empathy that exists among the nations throughout the Islamic world with the Iranian nation is due to the adherence of the Iranian people to the Imam's strategy, which is the negation of religious, sectarian, and racial lines in the Islamic world, and added: On this basis, we have always invited all Islamic countries to disregard issues such as "Shia and Sunni", "Arab and Ajam (non-Arab)" and other dividing lines, and to follow the principles.

The leader of the revolution considered the encouragement of other nations to stand up against bullying as the reasons for the anger of the arrogance system and their enmity and said: Neutralizing America's criminal plans in different countries, one example of which was ISIS, has caused dense Iranophobia and Shia-phobia propaganda and accusing Iran of interfering in other countries.

Emphasizing that the Islamic Republic does not interfere in other countries, he called the accusations of the rulers due to their inability to prevent the significant progress of the Islamic system. He added: Of course, everyone should be vigilant against arrogant policies and not go along with them.

Ayatollah Khamenei considered the current policy of arrogance to be to exaggerate the differences and unrealistic dividing lines in the Islamic world and said: Inciting and plotting for war between Shias and Sunnis, Arabs and Ajams, Shias with Shias, and Sunnis with Sunnis, which is now seen in some countries, is the policy of the great devil, the United States, which we must be vigilant against.

Ayatollah Khamenei pointed out that the followers of Ahl al-Bayt should be the standard bearers of solidarity and synergy and added: As we said from the first day, the formation of the Ahl al-Bayt World Assembly does not mean confrontation and enmity with the non-Shia, and from the beginning, we have been accompanying the non-Shia brothers who have moved on the right path.

He called "Islamic truths and teachings, trust in God, a hopeful look at history, the subject matter of al-Mahdawiyya " among the software capabilities of the Islamic world, and referring to the intellectual impasses of the West and the liberal democratic system; he added: Of course, in the field of hardware, the arrogant have strengthened themselves by colonizing and using the resources of the Islamic world and using all kinds of tricks, but the natural capacities of the Islamic world for progress are enormous, the importance of which, like oil and gas, has become more evident to everyone today.

Ayatollah Khamenei believes that the flourishing of capacities depends on firm determination, knowing the enemy, guidance such as the guidance of the honourable Imam and remedying shortcomings and said: Today, the Islamic Republic, as a model and a living reality, has been able to show resilience in the face of all kinds of hostilities and attacks, and turn that newly grown sapling into an old tree. Of course, being a role model means not imitating the political structure but adhering to the principles and foundations of the honourable Imam.

In the end, he pointed out that the Islamic world's future is bright, and the Shia community can play a significant role in it.

At the beginning of this meeting, HIWM Ramezani, Secretary General of the World Assembly of Ahl al-Bayt, gave a report on the seventh session of the general assembly of this assembly, which was held with the presence of personalities from 117 countries and with the slogan "Ahl al-Bayt (A.S.), the axis of rationality, justice and dignity".