Our academic elites are the cause of Iran's honour 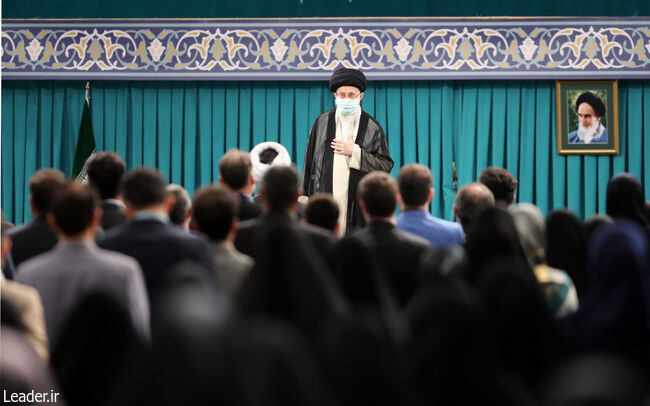 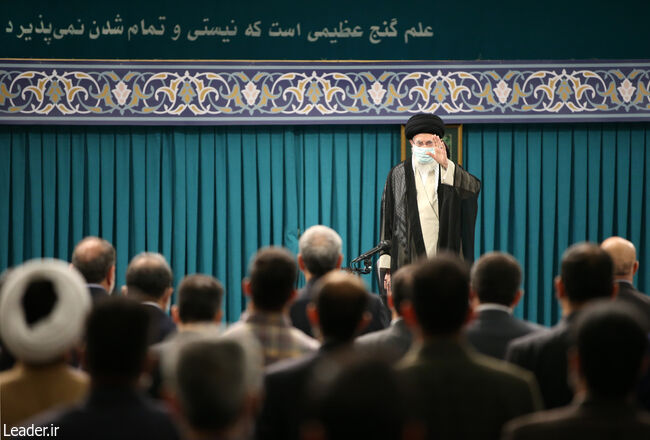 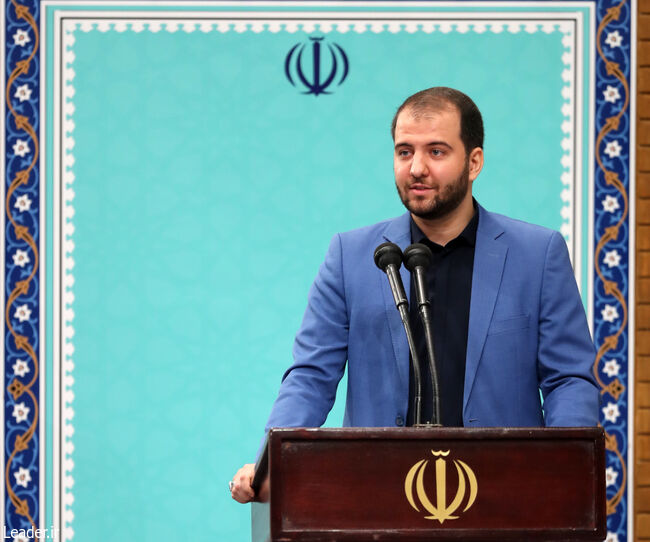 The Supreme Leader of the Islamic Revolution this morning (Wednesday), in a meeting with hundreds of young elites and top scientific talents, called the academic elites the cause of Iran's honour in the last four decades and added: Everyone, especially the officials and the most effective ones in the country, should consider the scientific elites as one of the most important assets of the country and support them, and the elites should turn their individual capacities and talents into the country's development capital.

Pointing to the country's bright future, he emphasized: In the last forty-three years, they have talked about the collapse of the Islamic Republic several times, but the stability and continuity of the movement of the revolution show that this analysis is wrong and unrealistic.

The leader of the revolution expressed deep gratitude to Allah for reorganizing the always cheerful and hopeful meeting with the elites after the Corona problem eased and said: The topics raised by the elites were excellent, and the suggestions were also correct and often practical, and it showed that many problems were management problems because there are solutions.

He assigned the ministers present in the meeting to transfer and follow up the proposals of the elites in the cabinet and added: We should work hard to take care of this defining wealth and increase it by treating the elites generously as a huge national wealth.

The leader of the revolution also called the university one of the biggest obstacles of arrogance and added: The powerful bullies of the world use weapons, deception and even science to dominate others and hold nations back, so a university that raises the country's scientific level indeed prevents the domination of the enemy.

Ayatollah Khamenei called natural talent and high intelligence, diligence, effort and perseverance, and divine guidance as the main elements of turning an intelligent person into an elite, distinguished and chosen person and added: Of course, providing a suitable environment is an important factor for the success of this process.

He called the establishment of the environment for elitism with the victory of the Islamic revolution as a certain and undeniable fact and added: After the revolution, with the development of universities in all parts of the country, the stunning increase in the number of students and professors and the creation of numerous research institutes and think tanks, the environment for the development of science and elitism has been provided, and the goal of the Islamic Republic, which is the expansion of universities and the promotion of scientific ability, has been achieved by Allah's grace.

The Leader of the Revolution emphasized that our academics did not allow the country to remain dependent on Westerners and said: Without any exaggeration, our academic elites are the cause of Iran's honour, and in every field our scientists entered and focused, they aroused the admiration of the scientific communities of the world, so others should appreciate you, and you should appreciate yourselves too, and I am very grateful to you.

In describing some of the honours of elites and scientists of the country, he mentioned the research and achievements of Royan Institute in fields such as stem cells and cloning of living animals, progress in biochemistry, launching and transferring satellites into space, fundamental achievements in the nuclear industry, the production of complex vaccines, including the Corona vaccine, and stunning advances in the rocket and drone industries.

Ayatollah Khamenei emphasizing that intelligent people who have used their talent and knowledge to make atomic weapons and chemical weapons or spy tools are not elites, added: an elite is a talented and hardworking person who has benefited from divine guidance.

He further raised the issue of "expectation from the elites" and said: An elite person is expected to turn their capacity into a national degree and to use their abilities to solve the country's problems.

The leader of the Islamic Revolution, while complaining about some elites who grow in Iran but take the fruits of this growth abroad and sometimes provide their capacity to the enemy by becoming the cogs in the system of the enemy, added: The elite should stay with their people, of course, there is nothing wrong with the elite emigrating and studying in top universities, but after finishing their studies, they should return to the country and use their abilities for the development of the country.

He considered another expectation of the elites to be "not to be neglectful" and said: The elites should not neglect their abilities so that their efforts and movement do not come to a halt and they do not become involved with harmful entertainment.

The Leader of the Islamic Revolution considered not neglecting the country's great and vast capacities as another requirement of being an elite and added: Unfortunately, most of the elites are not aware of the vast capacities of the country, and one of the important tasks of the Vice-Presidency for Science is to acquaint the young elites with the capacities and outstanding works in progress.

He emphasized: If we did not start the nuclear industry at the time we started, we would have entered into this issue 10 years later, and we would have reached a conclusion after 30 years.

The Leader of the Islamic Revolution considered "neglect of the enemy" to be one of the dangers facing the elites and said: Based on reliable information, the intelligence services invite the elites under the guise of scientific centres to deceive and attract the elites or to destroy their minds, and they also present themselves as very polite and intelligent so that they can advance their plan.

The leader of the Islamic Revolution added: One of the cases of support is that the elite who have studied inside the country or come from abroad can find employment here that matches their knowledge, as well as the possibility of research and communication with the world's scientific centres, and this is not a big expectation.

Ayatollah Khamenei, referring to the re-emigration of some elites who had returned from abroad, addressed the officials and said: We should not let the elites be discouraged from university and continuing their activities in the country due to some obstacles or inappropriate behaviour, and whatever we spend in this field is not an expense but an investment.

In the final part of his speech, Ayatollah Khamenei addressed a fundamental issue regarding the correct analysis of issues, correcting the horizons and moving forward based on it.

Referring to the continuous propaganda of the westerners from the beginning of the victory of the revolution until today regarding the deterioration of the Islamic Republic, he said: They set a time frame for this claim and every time they said that "in another month, another year or five years, the Islamic Republic will be done for", and some people promoted these claims internally out of negligence or malice.

Referring to the headline of one of the newspapers during Imam's lifetime that "the system is collapsing" and the Imam's retort that "you yourself are collapsing and the system is standing firm and strong", the leader of the revolution added: After the Imam's departure in 1989, some people, among whom there were well-founded people with a history, said in a declaration that "the system is on the verge of collapse".

Ayatollah Khamenei emphasized: We did not give up, stood our ground, and, Insha'Allah, will continue to stand our ground.

He said that the existence of two analytical systems in this field: An analytical approach believes that working and standing in front of universal global norms and the powers arising from these norms, such as The US, are useless and cause destruction.

The Leader of the Islamic Revolution said: But the second and realistic analysis is based on it considering the collection of facts, not only the good facts but also the alarming facts together, and moving forward based on that.

Ayatollah Khamenei added: We have never denied the weak points, and we have warned about this most of all in the Ramadan meetings of the country's officials and in private sessions, and we have said many times that we are behind.

The Leader of the Revolution added: But the remarkable fact is that the Islamic Republic has continued the rapid movement that it started from the end of the convoy, and today it has nearly reached the front of the convoy.

Referring to the country's brilliant progress in knowledge and various managements, he said: There are weaknesses, and some officials and governments have made mistakes, but the general movement is towards progress.

He considered motivated young people and elites to be the most prominent signs of the revolution powerfully moving forward and added: After four decades of the revolution and the mass hostilities and negative propaganda, the existence of a large number of elites who believe in this path and are working hard is the best reason for the accuracy of the revolution's analysis of the world and the correct path of progress.

At the beginning of this meeting, seven young elites expressed their views and opinions. Misters and Misses:

They talked about these points:

- Necessity of evolution in space programs, especially financial support on a national scale and strengthening of international partners

- The necessity of making policies on the growth of knowledge-based companies in sectors with demand and market and creating attractiveness for profitable public investments.

In this meeting, Dr Dehghani Firouzabadi, acting vice president for science and technology, said that the scientific movement in the country is a product of discourse creation and serious pursuits by the leader of the Islamic Revolution in the past years and referred to the need for the growth of knowledge-based industries in order to strengthen the value chain, said: The creation and revival of knowledge-based industries based on the law of production increase, cooperation with knowledge-based networks, support for technological domestic production and prevention of unnecessary imports are on the agenda of the government.