The Leader in a meeting with a group of eulogists and poets of Ahl al-Bayt (s.a)

The enemy's plan failed because their calculations were wrong 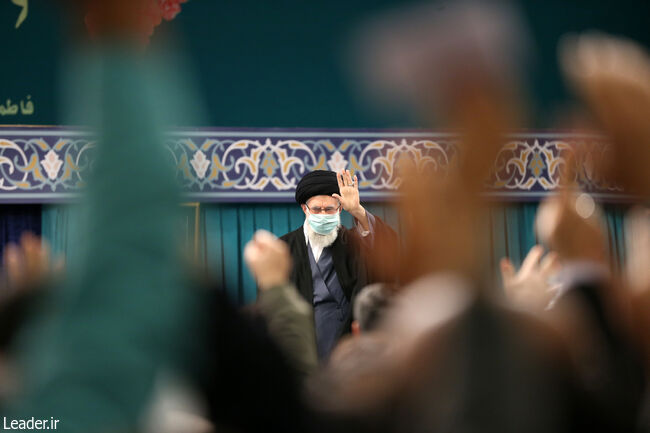 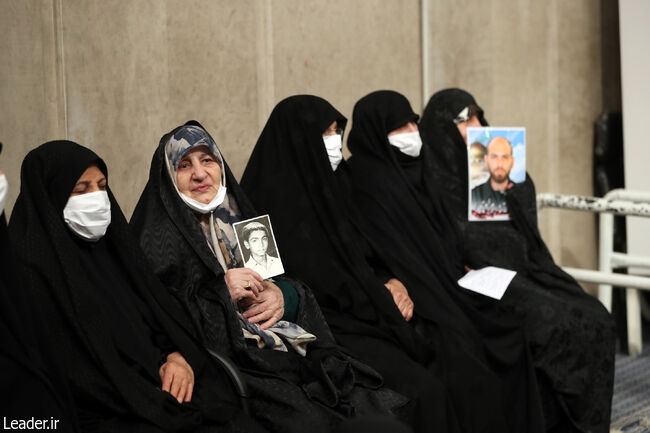 On the eve of the auspicious birth anniversary of Fatimah al-Zahra (s.a), the Leader of the Islamic Revolution, in a meeting with a group of Ahl al-Bayt eulogists, considered eulogy to be a combined art for conveying knowledge and emotions and playing a role in the country's sensitive battles and considered the reason for the failure of the comprehensive and planned plan of the enemy in the recent cases was their miscalculation of the reaction of the people, youth and officials and emphasized: the way to discourage the ill-wishers from enmity is to make Iran stronger.

In this meeting, Ayatollah Khamenei considered the love and devotion of al-Siddiqa al-Kubra to be very effective in personal and public affairs and addressed the eulogists by saying: eulogy is a Shia heritage and a complex art that is created from the combination of good voice, good poetry, appropriate melody and noble content, and all its elements should be beautiful like other valuable religious texts.

Pointing to the importance of the right melody in conveying concepts, he said: Some melodies that are fit for sinful songs are not suitable for the eulogy, and eulogy should not be mixed with them.

Ayatollah Khamenei listed raising the intellectual development of the society as one of the missions of eulogy and said: In the eulogy, in addition to knowledge, there is also arousing of emotions. Of course, feeling without thinking is not helpful, but the irreplaceable feature of epistemology in Shia texts is that, in addition to emotions, eulogy also increases the audience's cognitive depth.

Referring to the outstanding role played by the eulogists in the sensitive battles of the country, such as the holy defence and encouraging the youth to participate in the fronts and sacrifice for the country, as well as in various cases such as the 2009 sedition and the 30th of December (the 9th of Dey), he emphasized: Know where you stand as a eulogist and play your role by using the remarkable phenomenon of eulogy in the service of the revolution, meaning the modern transformation of the country and the expansion of ideas such as "fighting with tyrants, oppressors, arrogance and corruption".

The Leader of the revolution considered culture-making as another essential task of eulogists and said: "Persistence against the enemy or attack against it", "scientific progress", "family and having children", "insight and hope" and "standing against the discouraging tactics of the enemy against the minds of the youth" are among the concepts that require culture building and intellectual and practical guidance of the audience.

By enumerating the necessary conditions for performing these roles, he announced the first condition to be "being concerned about guiding people and avoiding money, fame and social status in the eulogy profession". He added: Another condition for eulogists to play their roles better is to build up their knowledge. So, strengthen your knowledge base by reading books on ethics, hadith, commentary and the works of great people such as Shahid Motahari.

Ayatollah Khamenei considered being up-to-date with important world events as another condition for an effective eulogy and said: The world is undergoing fundamental but gradual changes, and we are facing an important historic turning point or are currently in one, and you should be aware of these important changes in the world and the country by reading.

Emphasizing that the enemy used all the necessary factors to disrupt and destroy a country, he said that there was an economic factor because the country's financial situation was not and is not good. Hence, the livelihood problem of the people was a means for them to use.

The Leader of the Islamic Revolution added: Also, the security factor, the infiltration of spy teams, the uproar of arrogant Iranophobia in the world in various propaganda methods, bringing some internal elements with themselves, inciting ethnic, religious, political and personal motivations, and comprehensive propaganda were other disruptive factors that they started using months ago.

Ayatollah Khamenei noted: As an observer, in my heart, I said "well done" to the enemy's good engineering because they had provided everything and in the perfect amount, but despite this plan, which is also effective in some other countries, they did not succeed, because their calculations were wrong.

Ayatollah Khamenei added: They have been attempting against the Islamic Republic in every way imaginable for 40 years, but because their calculations were wrong, they have failed so far and will fail in the future.

Emphasizing that the enemy's miscalculations should not cause us to be negligent, he said: We should also be careful. Don't let us be negligent and proud and assume that it is over. We must stay in the field and know that hope and national unity are what save the nation.

The Leader of the Islamic Revolution noted: There are different preferences and opinions in the country, but about Islam, the system and the revolution, there is a consensus among the people. So, let's not let this unity fade away and don't contribute to ethnic and religious differences and stir up feelings of one group against another.

Emphasizing that anyone who harms the nation's unity is working for the enemy and is playing in the enemy's field and helping its plans, he said: Everyone, including pulpit elements, eulogists, academics, writers and poets, should pay attention to this issue and not underestimate the enemy.

Ayatollah Khamenei considered becoming strong as the main factor in demoralizing the enemy and added: When we become so strong that the enemy becomes frustrated, we can achieve peace of mind, which is why the repeated emphasis on Iran's strengthening.

Admiring the mixing of the anthem with a eulogy to convey essential concepts, he said: the aspirations of the revolution outside the country's borders are becoming more and more apparent day by day, an example of which was the spread of the commander's greeting anthem in other countries and it was performed in different languages, even in Persian, which can help the authority of the country.

At the beginning of this meeting, eight eulogists and poets recited poems and praised the virtues of Fatimah al-Zahra(s.a).