The Leader in a meeting with hundreds of teachers:

Education should raise a generation capable of building a civilization 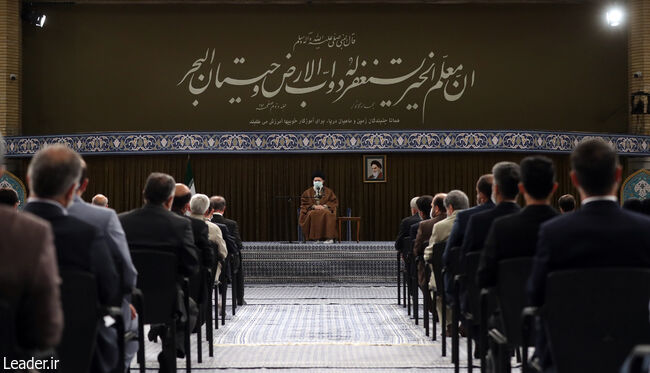 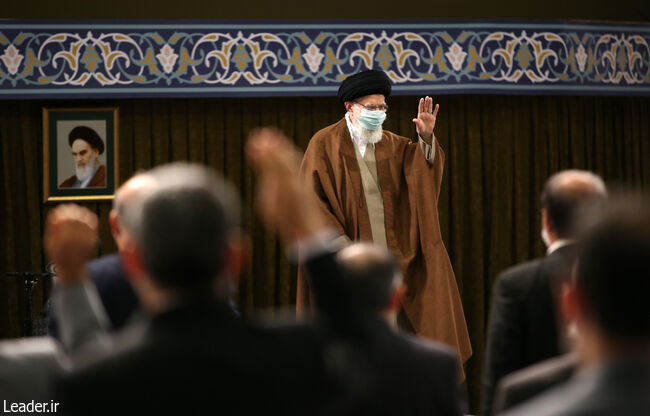 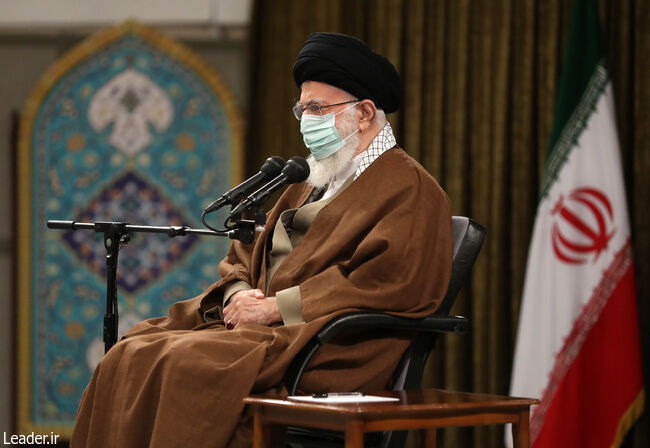 In a meeting held this morning (Wednesday) with hundreds of teachers and others active in the field of education, the Leader stated that education raises a generation capable of building a civilization. While praising teachers for their efforts, notably since the coronavirus pandemic appeared, and emphasizing the need to improve their living conditions, he stated that the young generation must be brought up so as to have a national and Islamic identity, be self-confident and resistant, be informed about Imam Khomeini's thoughts and aspirations, and be knowledgeable and efficient.

He said that teachers have the honour of guiding future generations. He added that the purpose of his meeting with teachers was to raise their profile and establish and consolidate the value of their work in the minds of the public so that both teachers and their families feel proud of what they do as teachers and so that society views teachers as carrying out a function that they can take pride in.

Thanking the Minister of Education for the good points he raised, the Leader said there is no lack of laws, documents, and decisions. However, what is missing is that the already made decisions are not implemented, and the rules are not enforced.

In explaining two of the ways in which the concept of teaching is used, the Leader stated that the teacher, as someone who teaches, is of great value because, according to verses of the Holy Quran, God the Almighty Himself is a teacher. Prophet Mohammad (peace be upon him and his family), all sages, men of knowledge, and outstanding personalities such as Martyr Motahhari being teachers were of great value.

The Leader added that based on the second definition of the concept of teaching, which is consistent with education, there exists a more significant value because those being educated are in a stage in their lives when they are most susceptible to being influenced and educated. The effect of education on them is far more significant than on people in other age groups.

Referring to the long-term goal of building a new and flourishing Islamic civilization, the Leader stated that human resources are the building blocks of all civilizations. The generation that will create this civilization is now under the control of teachers. Consequently, that is how the importance of teaching as a job must be understood.

The Leader of the Islamic Revolution stated that this generation, which has such lofty goals, must possess an Islamic and Iranian identity, strong convictions, self-confidence, the ability to educate itself and be alert in the face of defunct and obsolete eastern and western civilizations. It must also be equipped with a decent education and be efficient so that it can build this civilization.

Referring to the prominent people who came out of the Iranian school system, the Leader stated that, thanks to teachers' efforts, compelling figures in different disciplines were raised in the past four decades. However, he believes that this is not enough because many more well-educated people need to be trained if the goal of achieving a flourishing civilization is to be achieved.

The Leader is of the opinion that the twelve years available to the education system in Iran provide an unrivalled opportunity for the school system to educate this generation. Given the presence of schools in all towns and villages across the country, the way is open for teachers to inform their students of the values and aspirations of the revolution through their hard work and inculcate an Iranian and Islamic identity in them.

Calling the Ministry of Education an immense organization, the Leader said that by observing what the ministry is like today, it is possible to predict the country's future.

Emphasizing the need to praise teachers for their efforts, the Leader added that it is necessary to resolve existing problems through reason, wisdom, perseverance, hard work, and patience for the ministry to reach the desired state.

To solve the education system's problems, it is necessary to provide suitable texts and recruit more teachers. He added that the teachers' personality, commitment to Islam, and teaching skills are of critical importance. It should not be necessary for less-talented students taking the university entrance examinations to seek private tuition. He acknowledged that now, as in the past, it is not as though there are few committed and caring teachers.

The Leader added that students must have a national identity concerning education. At the same time as raising the flag of knowledge, they should, with self-confidence, raise the flag of "national identity, an identity which is both Iranian and Islamic and is something to be proud of."

Criticizing the fact that students are unaware of the achievements of the country in terms of hard-working personalities, Ayatollah Khomeini's enlightening thoughts, the fateful aspirations of the revolution, and the events that happened during the revolution. The Leader stated that, at the same time as teaching, teachers should familiarize students with these issues in a manner that they would be part and parcel of their existence.

Referring to the need for the students to understand the necessity to resist, the Leader said, in a world where eastern and western powers bully the rest, it is now imperative for the next generation to be taught the value and importance of resistance so that, in the light of these teachings, it would become capable of building a civilization, making the country and its people great.

The Leader advised the Ministry of Education to separate "useful knowledge" from "useless knowledge" in school curriculums. He defined valuable knowledge as that which will help the youth to unleash their potential, creating capital for them and thereby allowing the country to progress. He added that some of what they are taught is of no value to them either now or in the future. Useless knowledge must be identified and omitted from the curriculum.

Emphasizing the need to set aside time in schools for teaching skills instead of useless knowledge, Ayatollah Khamenei said skills such as how to lead an Islamic lifestyle, cooperate in society, study and do research, get involved in jihadi activities, fight against social issues, have discipline and follow the law constitute some of what is necessary to teach at schools so that they become personality traits of young people from an early age.

The Leader said he was not happy with how far the document on education had been implemented. He added that although ten years had passed since this document was adopted and in this period, many ministers had come and gone, the document was yet to be implemented in full. He also described the multiple changes of ministers as a pathology. He further said that if the document needs to be amended or supplemented, then those in positions of responsibility should do it. At the same time, quantitative criteria should be identified and adopted which will allow us to measure our progress.

Referring to issues related to teachers, the Leader stated that the heavy responsibility of education rests on the shoulders of teachers. He added that beloved teachers who had in different junctions of time, such as during the revolution, during the sacred defence, and while various political events were unfolding, guided their students, now more than ever, should be mindful of their essential role and heavy responsibility. They must not allow their financial problems to drive them to despair or make them underrate the importance of their task.

He described the youth as precious gems entrusted to teachers who, being believers, should assist their pupils in developing knowledge and ethics.

The Leader of the Islamic Revolution stated that universities and teacher training colleges carry a heavy responsibility and hence should be strengthened in every possible manner. He added that these centres should be supported by providing them with better equipment, good managers, teachers, textbooks, and training so that they can produce "good teachers."

He stated that the fields of study of trainee teachers should, as far as possible, correspond with the subject or subjects they will be teaching after graduation. Referring to the difficulties teachers have gone through because of having to teach online due to the coronavirus, he said that we should all thank them sincerely for their efforts.

Whilst being aware of the limited resources at the government's disposal, as always, he advised state officials to pay special attention to solving the financial problems that teachers are faced with and ensuring that they have access to adequate medical insurance and a decent pension on retirement.

He ended his speech by advising teachers not to wait for the Ministry of Education to meet their expectations in terms of pay and benefits but to educate children based on their personal initiative and sense of caring and wished their students well.

At the beginning of this meeting, Mr Nouri, the Minister of Education, gave a brief report on the plans and policies of his ministry concerning how the ministry sought to transform the way it carried out its functions, how it meant to take advantage of the opportunities provided by cyberspace and new technologies in the field of education, how it intended to provide an equal opportunity for all in terms of access to education, how it wanted to teach skills, how it tried to help gifted children realize their potential, how it sought to rank teacher and solve their financial problems and provide better resources for learning to students.